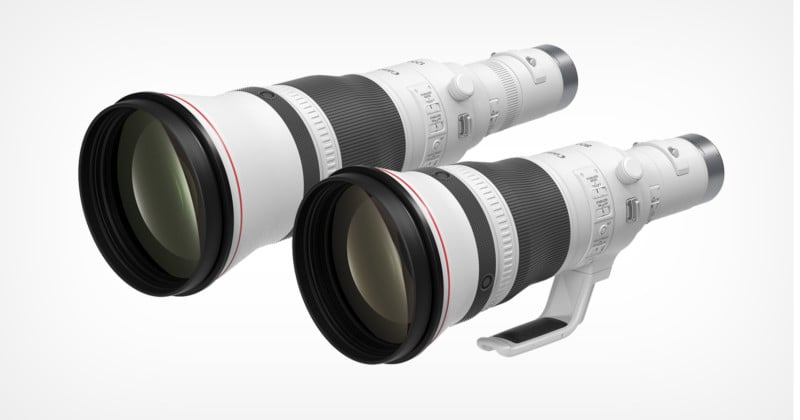 Canon has announced two new super-telephoto lenses for the RF mount: the RF800mm f/5.6L IS USM  and RF1200mm f/8L IS USM. Unlike what was the case with the 400mm f/2.8L and 600mm f/4L primes launched last year, these two new lenses are unique.

While the lenses do have a link to the EF originals, there are differences. Their optics are essentially identical except for the addition of a specialized set of optics at the back of the lens, acting as a high-quality 2x tele-extender.

The two lenses are touted as “quite light” for their focal lengths and share many of the same features between one another, including Canon’s Super Spectra Coating (SSC) and Air Sphere Coating (ASC) which it says helps minimize ghosting and flaring, as well as a customizable electronic focusing ring with manual focusing capability during Servo AF. The two optics are also compatible with Canon’s RF1.4x and RF2x extenders.

Both lenses also have two focus presets with the ability to instantly switch between memorized focus distances, and both share a circular nine-bladed aperture. Finally, the RF800mm f/5.6L IS USM  and RF1200mm f/8L IS USM lenses have the same durability, with dust and water “resistance” as well as a fluorine coating on the front element that resists dirt, oil, and water and makes the lenses easier to clean.

The Canon RF800mm f/5.6L IS USM weighs 6.9 pounds and features a minimum focusing distance of 8.53 feet (2.9 meters) with a maximum magnification of 0.34x. It has Canon’s optical image stabilization (IS) that provides up to 4.5 stops of shake correction and includes three IS modes. As mentioned, it is compatible with the RF1.4x and RF2x extenders which can turn it into an 1120mm and 1600mm optic, respectively. Autofocus is fully possible with either extender. 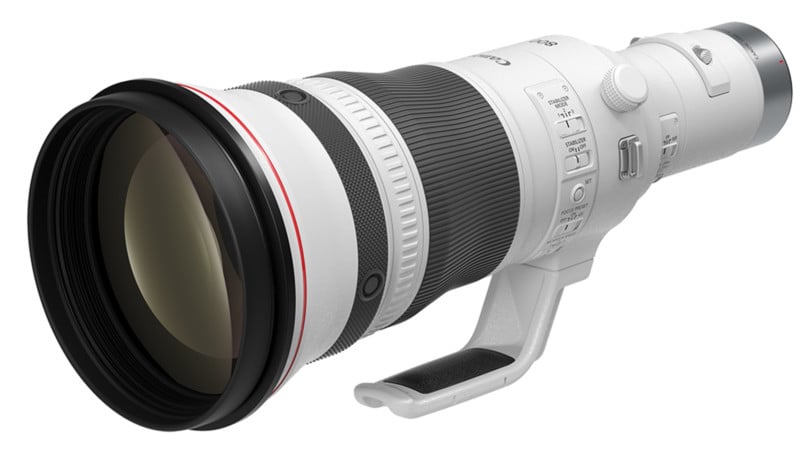 The lens is constructed of 26 elements in 18 groups, including two fluorite elements, one ultra-low dispersion (UD) lens, and one super UD lens. The focusing drive system is Canon’s USM low-speed drive (Ring USM). 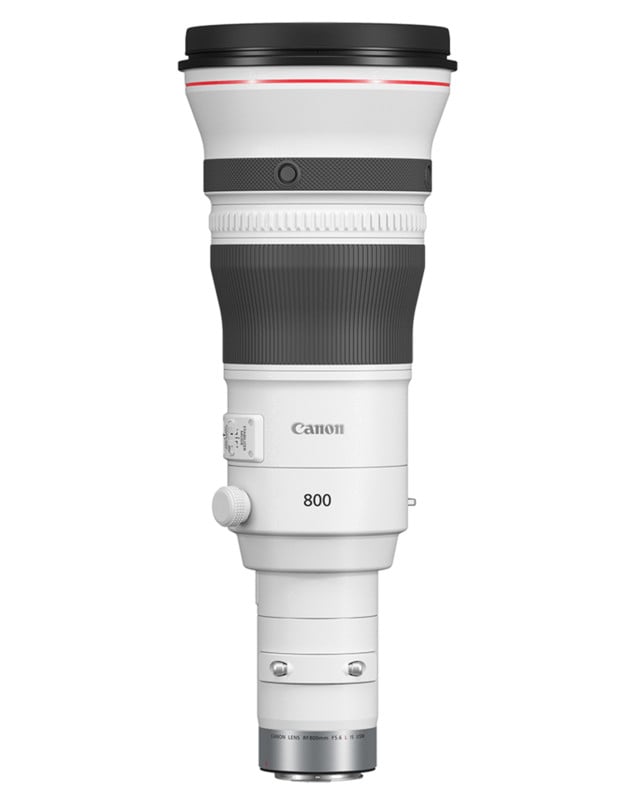 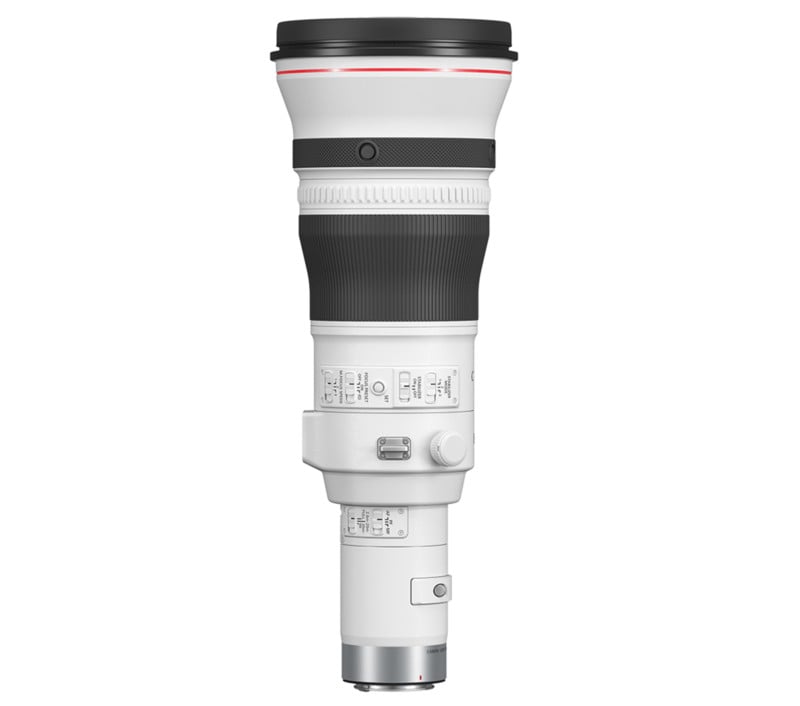 Canon says the 1200mm f/8L IS USM is the “most powerful” super-telephoto lens in Canon’s RF line. It weighs 7.4 pounds and features a minimum focusing distance of 14.1 feet (4.3 meters) with a maximum magnification of 0.29x. Optical IS supports up to four stops of shake correction and, like the 800mm, has three IS modes. Combined with the RF1.4x and RF2x extenders, the lens can reach lengths of 1680mm and 2400mm respectively, and autofocus remains possible with either extender. 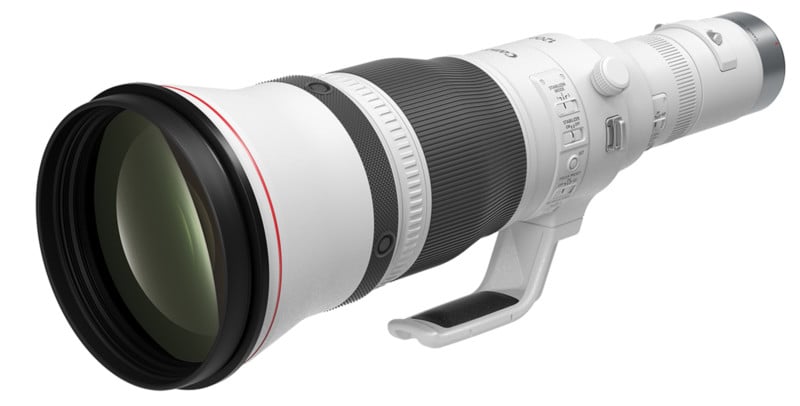 The lens is constructed of 26 elements in 18 groups, including two fluorite, one ultra-low dispersion (UD) element, and one super UD element. The focusing drive system is Canon’s USM low-speed drive (Ring USM). 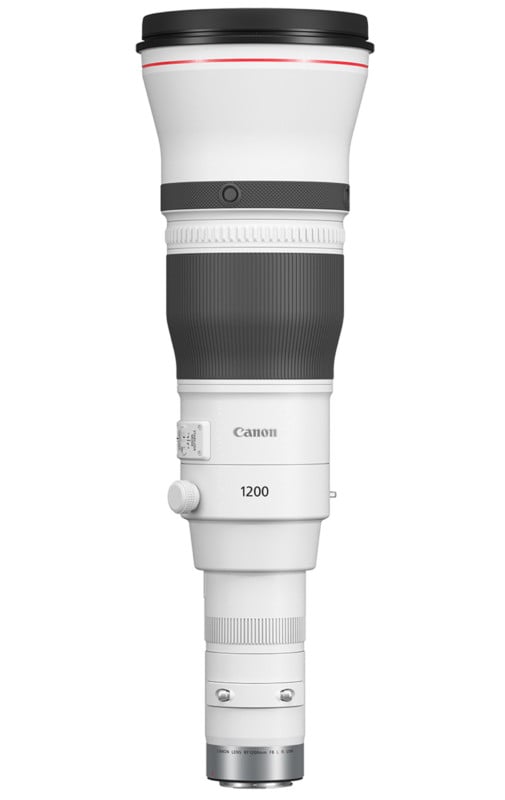