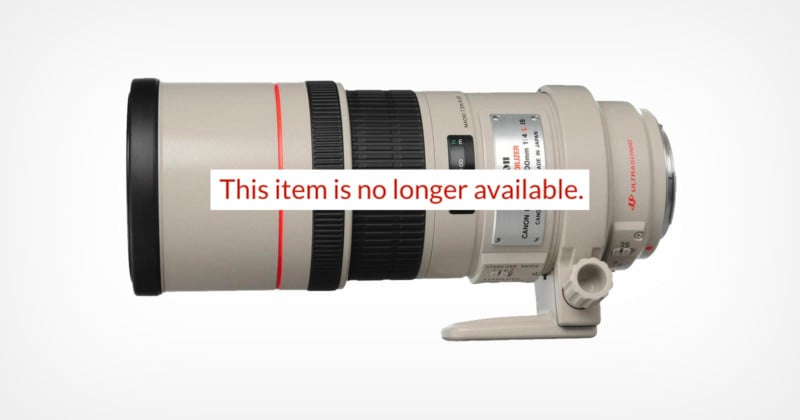 Canon has been quietly discontinuing many lenses in its EF catalog over the last year, and a new report alleges the practice has gotten particularly aggressive in the last month.

Japanese photographer Kimio Tanaka tweeted a photo that shows Canon’s lens lineup in Japan on January 8 compared to February 10, reported by Digicame-Info, and the prime lenses that are now available in the country fell from 21 to just nine in that period.

The only lenses that he was able to find as still in production in Japan for the EF mount are as follows:

Because available stock can vary from region to region, PetaPixel checked Canon USA’s list of currently supported EF lenses and found that the company claims it still supports 26 prime lenses.

However, on close inspection, it appears that is not actually the case. Checking that list against Adorama’s stock, it appears that nine of those lenses are actually no longer available to purchase from the dealer, indicating that its buyers have been told they have been discontinued. Below is the list of lenses that can no longer be purchased new:

That leaves 17 prime lenses that are still technically supported:

However, of those 17, six are back-ordered:

That leaves just 11 prime lenses that are actually available to purchase today in the United States, three more than Tanaka says Japan currently has. The explanation for the discrepancy is likely that Japan, as the home base for Canon Global, would see changes to supply and stocked products first before its other regions.

Whatever the case, Canon is clearly continuing to shave down its EF lens production and support. Backordered lenses are the most concerning, as they will likely be the first on the chopping block, especially considering all but two of the lenses that are listed as back-ordered from Canon USA are discontinued in Japan.

It should be noted that PetaPixel reported many of these lenses were already discontinued or were slated to be last spring when Canon Rumors started tracking the company’s rapid sunsetting of its EF lens lineup.

Canon has gone on the record in the past saying that it doesn’t like to think of lenses as being discontinued or abandoned, but rather that the system is being optimized. Canon is clearly focused on mirrorless in 2022, and more EF lens discontinuations should be expected.