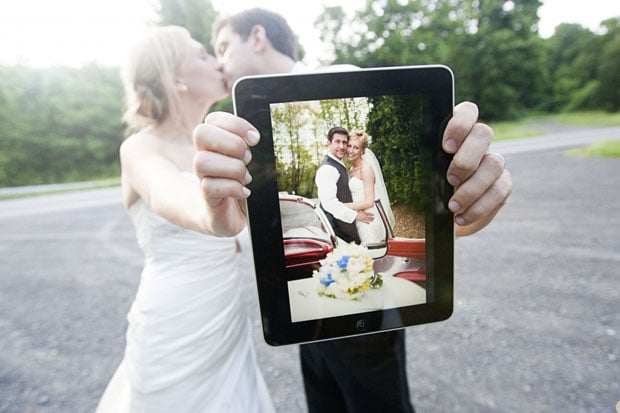 Some wedding photographers offer a package that includes an iPad pre-loaded with images from that special day.

It’s a simple, yet brilliant way to get both bride and (especially) groom more excited about the album — while assuring their photos won’t lie forgotten in a dusty album years later.

The digital trend is catching on, said Pennsylvania-based photographer Daniel Lanton, who bundles the iPad with engagement photos. Lanton said in an interview with Tampa Bay Online that the iPad it adds a bit more immediacy to the images, as well as a sort of permanence in a new digital age:

“I just foresee a time when the wedding album becomes non-existent or continues falling away … Now I’m selling more iPads with bound albums. I sold six in the first week.”

Another photographer, Florida-based Stephen Yanni said that future grooms light up when they see the iPad package:

“If I’m presenting photo packages to a bride and groom, I can tell you when the guy sees that iPad, he sits up, and gets excited for the first time in the whole wedding-planning process.”

Of course, if you plan on actually taking the iPad with you everywhere you go, it’s a good idea to also keep a physical photo album somewhere, even if it’s in the darkest recesses of a closet. Hard copies may fade and collect dust, but they  are much less likely to have a data failure, break, or get stolen.

Image Credit: Photo by Daniel Lanton of Darker Shades of Brown and used with permission

Hilarious Parody of Photo Enhancing in Movies and TV Shows