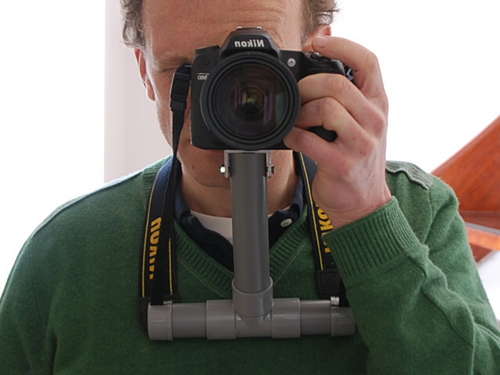 When Instructables member bertus52x11 had his cast removed after breaking his arm, he found that his arm was too weak to handle his DSLR camera. Realizing that those less fortunate might have similar problems with handling heavy equipment, he created a do-it-yourself camera support using PVC pipe that transfers the weight of your camera to your chest.

In addition to allowing people to more easily handle heavy cameras, the chest support also acts as a stabilizer, reducing camera shake in situations where you don’t have a tripod. He writes,

This device can help people with a weak arm or hand, but it can be helpful to people with Parkinson to stabilise the camera. Naturally it can be used for stabilising pocket cameras as well. You can then slim down the design by using smaller (copper) tubing. Once you have chosen for copper, a Steampunk design is never far away. I would like to see that!

If you’re interested in creating such a support for yourself or someone you know, check out the easy-to-follow tutorial on Instructables:

Supporting a dSLR camera on your chest (via Lifehacker)