For some April Fools fun, we here at PetaPixel went through the trouble of using a new design for half a day this morning. It looks like Digital Photography Review took their joke a step further: they created a fake company with a fake website and published a fake press release.

The company, “Rokton Circular sensors”, is supposedly based in Cambridge and has “reinvented” the image sensor by making it circular. The press release published on dpreview states,

Cameras using Rokton sensors will cover a circular image fully 43mm in diameter – the same as the diagonal of a 35mm film negative, or a ‘full-frame’ digital sensor. This allows you to capture the entire image circle projected by your lens, wasting none of the light it gathers, and giving you the ultimate flexibility to crop the image any way you like after capturing that decisive moment. […]

Rokton chief executive officer Dr. Hwee Ng said ‘We’ve noticed that the ultimate imaging device, the human eye, is kind of round, lenses are round, and the most common photographic subject in the world – the human face – is often round too. The more we thought about it the more we realized a circular sensor made perfect sense.’ […]

‘We foresee the circular image literally revolutionizing photography. We can see a market for a range of products to match the sensor concept, from circular printer paper to picture frames. The circular image also ideally matches a huge number of popular photo uses, from DVD labels to coasters. And the best thing about circular photo frames is that you won’t have to hang them straight.’

Why do we think this whole thing is a joke? Well, first of all, dpreview is the first and only news source reporting on this supposedly revolutionary technology. Second, a simple WHOIS query shows us that the rokton.com domain name was only registered on March 31st, 2010. Hmmm…

What’s funny is that at least one photography news site seems to have believed the joke. Steve’s Digicams took the press release and published it as news: 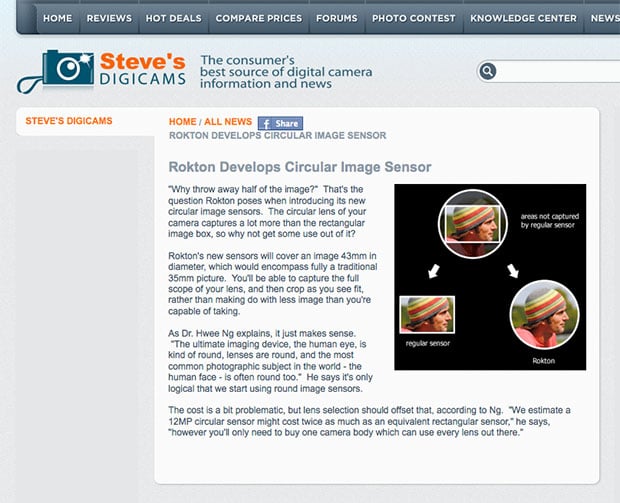 This whole thing is almost as absurd as Kodak’s Aromatography joke we posted earlier today.

We can all breathe a sigh of relief tomorrow when this day of Internet absurdity is over.

Photography Predictions from 20 Years Ago