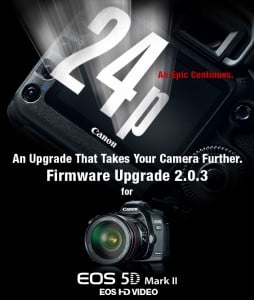 When Canon released the 5D Mark II, many who wanted to utilize the HD-video recording capabilities were disappointed that it only offered 30 frames per second (fps) and not 24.

Here’s why this matters:

24 fps is a desirable frame rate because it delivers video that has a cinematic look and feel. Of course, many other factors contribute to giving video a “movie look”, but frames per second is a big component. Virtually every movie you see at the movie theater was filmed at 24 fps (also known as 24p).

On the other hand, most of the stuff you see on television is shot at 30 fps, which is closer to how our eyes naturally see. This means there can be less motion blur, making it more suitable for things such as sports and news. This is also why most TV shows don’t have a “movie feel” to them.

The problem is that video cannot be perfectly converted from 30fps to 24fps, or vice versa. Thus, those who used the 5D Mark II were either stuck with the native 30fps or less than ideal 24fps if they somehow convert it.

Now, with the firmware update, the 5D Mark II can naturally obtain the movie-like quality that many have waited so long for.