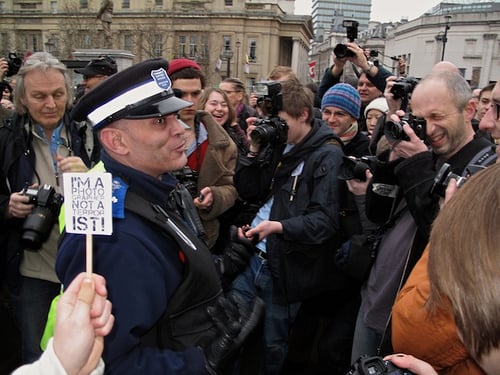 More good news for photographers in the UK. A week after UK’s terror tsar called for the abolition of Section 44 of the Terrorism Act, UK’s Crime Minister David Hanson has new statements assuring photographers that anti-terrorism legislation should not be used to hinder photography. He is quoted as saying,

I recently met with Austin Mitchell MP, members of the Parliamentary All Party Photography Group and representatives of the photographic press and the Royal Photographic Society to discuss the issue of counter terrorism powers and offences in relation to photography.

I welcomed the opportunity to reassure all those concerned with this issue that we have no intention of Section 44 or Section 58A being used to stop ordinary people taking photos or to curtail legitimate journalistic activity.

Guidance has been provided to all police forces advising that these powers and offences should not be used to stop innocent member of the public, tourists or responsible journalists from taking photographs.

These powers and offences are intended to help protect the public and those on the front line of our counter terrorism operations from terrorist attack. For the 58A offence to be committed, the information is of a kind likely to be useful to a person committing or preparing an act of terrorism.

I have committed to writing to Austin Mitchell MP to reinforce this message and to follow-up on the representations made.

Indeed, news of photographers being stopped unreasonably has died down in recent weeks, so it seems as though things are becoming more photographer-friendly in the UK. If you’re in the UK, have you noticed any improvement?

How Not to Paint Your Nikon D90 Pink