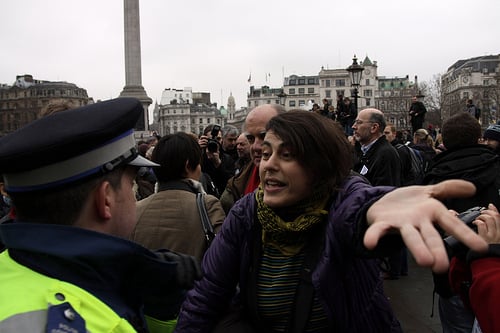 Lord Carlile, the official reviewer of terrorism legislation in the UK, has begun calling for the abolition of Section 44 of the Terrorism Act 2000. The controversial stop and search law that allows police to search individuals without having reasonable suspicion has become the bane of many street photographers, who are often ordered to stop shooting and are detained when uncooperative.

In January, over 2,000 photographers gathered in Trafalgar Square in London to protest Section 44, and apparently the negative publicity has gotten the attention of the government. The London evening standard reported yesterday that Carlile has begun calling for the act to be repealed:

Lord Carlile of Berriew said the use of Section 44 powers was having a “disproportionately bad effect on community relations” and had become “counter-productive” in the fight against terrorism.

He also revealed that not a single arrest for terrorism offences and only “morsels” of intelligence had resulted from more than 200,000 such searches carried out last year — 151,000 in the Metropolitan Police area alone.

He suggests that the new law should allow searches without reasonable suspicion to be carried out only during terrorist events or around a small number of sites critical to the countries infrastructure.

What we found interesting was the following quote:

Nothing fills my in-tray and in-box more than complaints on the use of Section 44.

Well photographers, your voices were heard!

Image credit: ‘Im a Photographer not a Terrorist’ by =chris=

Print Your Own Free Bounce Card