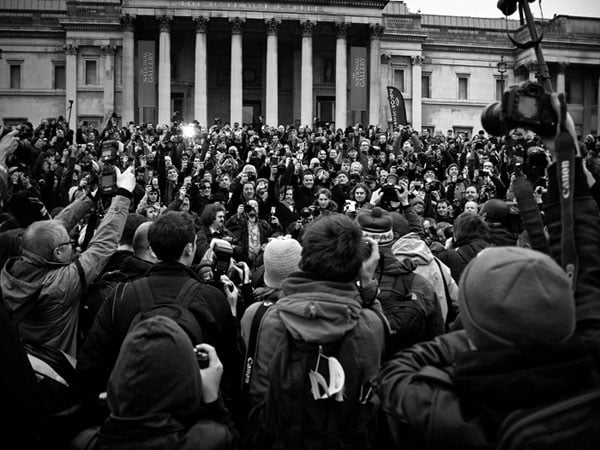 This past Saturday, over 2,000 professional and amateur photographers gathered at Trafalgar Square in London to protest recent cases of anti-terrorism laws being used to stop public photography. The protest, organized by the group I’m a Photographer, Not a Terrorist!, was against section 44 of the Terrorism Act 2000, which allows officers to stop and search photographers without needing any “suspicion” if the photography is occurring within certain areas. 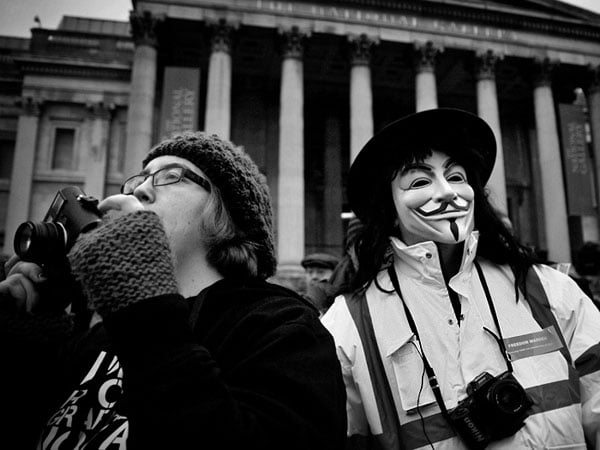 After a number of high-profile incidents in which photographers — some award-winning — were stopped, searched, and even detained, memos have been circulated among police forces advising them to exercise more discretion in their duties:

Whilst we must remain vigilant at all times in dealing with suspicious behaviour, staff must also be clear that:
– there is no restriction on people taking photographs in public places or of any building other than in very exceptional circumstances
– there is no prohibition on photographing front-line uniform staff
– the act of taking a photograph in itself is not usually sufficient to carry out a stop.
Unless there is a very good reason, people taking photographs should not be stopped.

Officers should be reminded that it is not an offence for a member of the public or journalist to take photographs of a public building and use of cameras by the public does not ordinarily permit use of stop and search powers.

However, stories of officers hindering photographers’ work continue to surface, prompting photographers and groups to step up their calls for more leniency and freedom to photograph without being confronted.

Were you at the protest? Have you been stopped and searched in the UK? If so, we’d like to hear from you in the comments!

Image credit: Photographs by Rion Nakaya and used with permission.