Something you may have noticed when adjusting your camera’s ISO setting is that as you increase ISO, the number of remaining shots you have decreases. This is because the size of each photograph increases with ISO, and thus less of them can be stored in the available space of your memory card.

So why does the file size increase as you increase ISO? The answer has to do with image noise and file compression. First we’ll discuss the noise element.

You probably know already that a higher ISO number leads to more noise in the resulting image. This is because digital cameras achieve the same behavior of “more sensitive film” by amplifying the image signal the camera receives when it captures a photograph. This amplification also amplifies the noise that exists in every image regardless of ISO, and therefore higher ISOs have highly amplified noise.

To demonstrate, I captured the following photograph at both ISO 100 and ISO 3200: 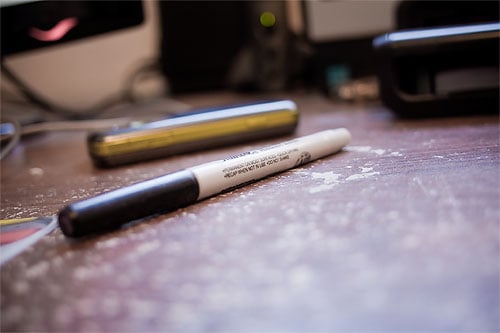 Here’s a side by side comparison of crops from the two images: 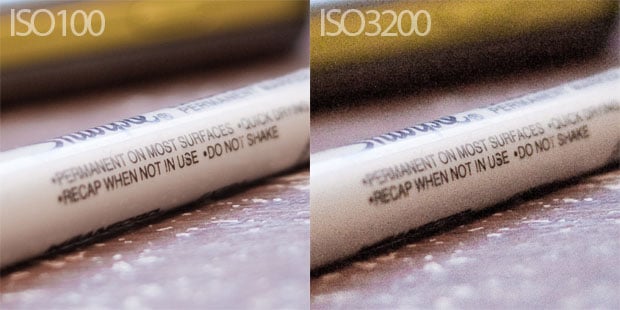 An interesting property of digital cameras is that there is more noise in darker regions of photographs than brighter regions. The opposite is true for film. This means that the file size difference discussed here will be far less when shooting with more light, such as when you’re photographing outdoors.

As an example, here is another scene that I photographed first at ISO100, and then at ISO3200:

Though there is still a significant amount of noise in the image, the ISO100 photo has a 15.8MB file size, while the ISO3200 photo is 16.7MB. This means that for this outdoors shot, the higher ISO only caused a 5.7% increase in file size. There’s other factors that will cause this percentage to fluctuate, such as the complexity of the scene, but in general the percentage should be less when photographing with more light.

Now that we’ve shown the increased image noise that comes with higher ISO numbers, we’ll discuss why this causes the file size to increase.

Regardless of whether you’re shooting RAW or JPEG, it’s likely your photographs are stored in a compressed format. While some cameras allow you to choose whether and how files are compressed, RAW images (i.e. Canon’s CR2 format) are usually compressed using a lossless algorithm, meaning the exact original data can be reconstructed from the compressed data. On the other hand, JPEG is lossy, so the more you work with JPEG files, the less data you’ll have as the compression throws out more and more data.

Here is a sequence of images from Wikipedia showing lossy compression (with PNGs):

The image on the right is the most compressed, and therefore has the least information. There is no way to recover the original detail from the compressed image to reconstruct the original (on the left), since the information was thrown out in order to save space when compressing the file.

The reason noise increases file sizes is because image compression relies on repetition, or patterns. In images with less noise, there are more areas of consistent patterns (i.e. the clear blue sky) that can be compressed. On the other hand, when noise is introduced, these adjacent areas that could have been grouped together and compressed must be split and stored separately, since the noise introduces randomness that cannot be compressed.

On the left is a square with solid blue, which affords maximum compression and therefore the smallest file size. The second square has two shades of blue, alternating by row, while the third square alternates by column. Due to the way the JPEG format compresses images, the second square can be compressed more efficiently than the third, even though both contain exactly the same number of pixels of each shade. Finally, the last square has artificial noise added in using Photoshop. This noise introduces randomness, which results in the least compression and the largest file size.

Now, for a super simplified example of compression, consider the following “photo” with 3 “pixels”:

Since all three pixels are the same, instead of storing the data for all three, one possible way I could “compress” the photo would be to store the color information once and just remember that the entire range of pixels is that color. (i.e. Pixel 1-3 = Blue)

Now, lets say some “noise” is introduced, which changes the image to the following:

Now I can’t specify a single range and a single color, since the sequence has been interrupted. The best I could do might be to say (Pixel 1 & 3 = Blue, Pixel 2 = Yellow), which obviously takes more information to represent.

This isn’t exactly how image compression works, but hopefully you get the point that randomness interferes with compression.

In this post we showed that increasing ISO causes increased noise, which in turn causes larger file sizes due to inefficient file compression. Many of you more advanced photographers might have known some (or all) of this already, but hopefully it was illuminating for some of you.