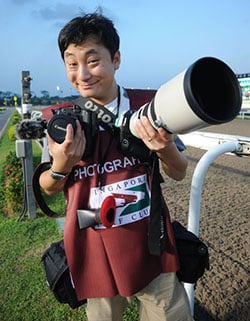 Chung then slapped top of the line lenses on the bodies and proceeded to test the low-light video performance by filming at a racetrack and on the streets of Singapore.

From the resulting videos posted below, we’re given a glimpse at the low-light video quality of the 1D Mark IV. Though many of the shots (especially on the street) were filmed in near darkness at ISO 1600-6400, the camera still captures a startling amount of detail.

Personally, I think it’s great that camera manufacturers are focusing a lot on video features of DSLR cameras, since it allows photographers who would otherwise not have access to HD video gear to try their hand at filming.

So what’s Chung’s conclusion regarding the Mark IV?

I’m glad to say that the short answer is that it does and its low light video is truly stellar, easily beating my 5DmkII and 7D.

The film you see here was filmed in just one night of horse racing at the Singapore Turf Club. Shooting at between 1600 and 6400 ASA under just the floodlights I got results that were far cleaner than I’d expected. The rolling shutter effects seem to be improved over the 5DmkII too, its still there but you need to look much harder for it. The one thing that is still evident on the pre-production model I was testing is aliasing, personally I didn’t find it too distracting but make up your own mind.

Here are the two videos. The first is of horse racing filmed at the Singapore Turf Club:

The next video follows 28 year-old Marvin as he cruises the streets of Singapore in his Mercedes SLK. (Note: His life seems to revolve around his car):

A Digital Dog Tag for Your Lost Camera