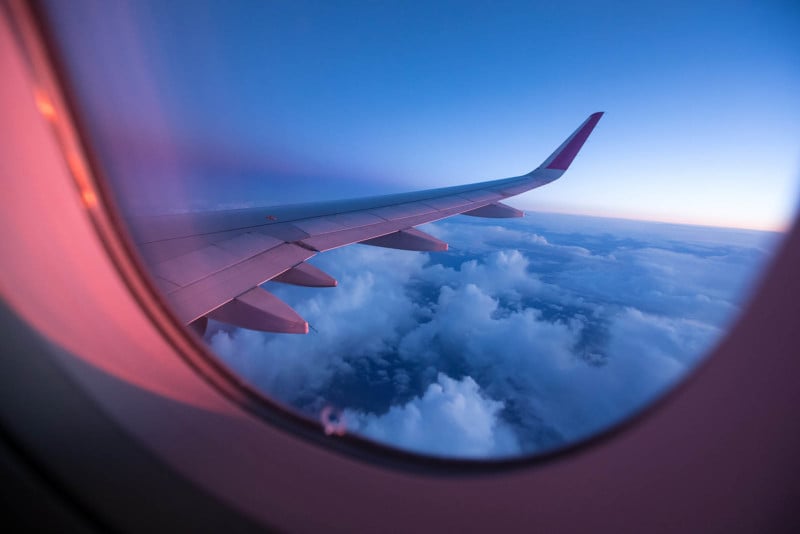 If you are a photographer and travel by air then you know that some of the views from an airplane window can be absolutely stunning. Carrying a camera with you when flying can not only work as a nice diversion to kill time but also allow you to capture some incredible images. While your fellow travelers are busy on their tablets, phones, or sleeping, you can be enjoying and capturing some amazing views!

What Is the Best Seat for Airplane Window Photos?

Some seats are definitely better than others and of course, we are talking about window seats only. You want the best unobstructed view you can get (or afford) and that unfortunately eliminates the exit row seats.

When booking your flight it is useful to know the plane type (i.e. Boeing 737) but ideally you want to be forward of the wing by at least three or four rows. On a 737 this usually means rows 6 through 9 (include rows 1-4 if you are a first-class flier). If these seats are not available then four to five rows or more behind the wing will work okay.

If you get too far back then the plane’s rear stabilizer could obstruct some of your view. Also, keep in mind that being behind the wing means you may have heat from the engines add a weird shimmering to your images.

To help with seat selection use websites such as seatguru.com to let you look up the seat configuration based on airline and airplane type. Having a seat with a wing view is not the end of the world so try to use it as part of your composition.

There are several ways to find out your flight path. First, look at Google Maps and get an idea of what is between your departure and arrival airports.

There are also useful websites that will show the actual flight path for a specific flight number. Flightaware.com is one of the more user friendly sites that helps you track flight paths. By knowing your flight path you can select which side of the plane will give you the best opportunity for great images.

A good example is a flight from Seattle to Phoenix. If you sit on the right side of the plane you will usually see most of the volcanic mountains in southern Washington and most of Oregon.

Sit on the left side of the plane and you will generally get awesome views of Mt. Rainier and your chances of incredible Grand Canyon shots are greatly increased!

Consider the Time of Day

Photography is all about light so when you fly is a controlling factor whether to pull out your camera or not. If you are traveling at night then put your camera away and get some sleep or watch a movie. An airplane is just not a stable enough platform for long exposure images even at higher ISO settings.

The one exception might be if you are taking a night flight over the polar regions where there is a possibility of seeing auroras. When flying east (i.e. Seattle to London) sit on the left side of the plane. When flying west (i.e. London to Seattle) sit on the right side of the plane. If you are flying directly over the pole then you are probably good with either side.

There are several online sources available that attempt to track aurora activity such as the NOAA Space Weather Prediction Center. Photographing auroras can be a challenge since it requires longer shutter speeds at around 2 seconds and high ISO settings. Take a lot of images and see what you get!

Helpful hint: Have a coat or blanket handy to put over your head and camera to shield reflections from inside the airplane cabin. If you have a neck pillow, wrapping it around the lens and pressing it against the window works like a charm.

Where Is the Sun?

When taking daytime flights consider where the sun will be for the majority of your flight. You want to avoid having the sun in your face since this makes it nearly impossible to avoid glare in the plane window.

An example would be the early morning Seattle to Atlanta flight. The best choice would be a seat on the right side as the rising sun will be facing the left side of the plane for most of the flight. The exception might be if you want to capture a sunrise or sunset (and of course all photographers love a good sunrise or sunset!).

If your window is badly scratched and you are facing the sun, good luck. Scratched windows amplify the glare and make it almost impossible to capture a good image.

Helpful hint: Have a cloth handy to clean your window if necessary.

What Camera to Use

There is no need to get into specific brands of cameras or lenses here but it never hurts to have the best gear your budget allows.

This lens is very sharp and easy to use since you just set the focus to infinity and fire away. A fast f/1.7 aperture allows you to keep the ISO at 100 and use faster shutter speeds for most images. The low aperture also minimizes smudges or scratches on the window because of the shallow depth of field.

Regarding the camera body, a higher resolution can prove really useful when editing as it provides more latitude when cropping the image.

There are many very capable point-and-shoot cameras that are compact and would be up to the task of airplane window photography. Some level of manual control would prove useful so you can adapt better to odd and changing light conditions (i.e. low light, high contrast, sun in your face).

What Lens to Use

It is possible to take two images to combine as a panorama but since the airplane is moving you have to be quick.

A 24-70mm zoom lens would work well but would not be as compact as the 50mm prime configuration. On rare occasions a 70-200mm, f/2.8 zoom could be useful for more distant subjects however you may not want to deal with the weight and bulk.

While composition can be a very broad subject it is pretty easy to say that traditional rules apply well in the case of airplane window photography. Leading lines (such as river valleys) and “rule of thirds” are good baseline concepts because you are essentially taking landscape images.

Unfortunately, you do not have much control regarding where the camera is placed since you are restricted by your little airborne porthole. It is really a matter of how you can point your camera up or down and right or left. Because of the narrow point of view, composition sometimes takes a backseat to just getting a usable image.

The image of mountains in Greenland does not have great composition but the clouds, mountain peaks, and environment combine to make it really interesting. This is where a higher megapixel camera can pay off since you have more options for cropping and composing the image when post-processing the image. The final goal is to simply take the shot when you can and hope that a better composition presents itself as the plane moves.

It can be a good idea to have your camera ready for takeoff and landing because you can sometimes get some very interesting images. Be sure to use a fast shutter speed (around 1/250 or faster) since the ground will appear to move faster than when you are at cruising altitude.

When shooting from airplane windows sometimes lighting conditions cooperate and very little editing is necessary to get an acceptable image. However, that is usually not the case.

The biggest challenge is dealing with haze in the atmosphere that detracts from image detail. After experimenting with several different techniques my current workflow uses Adobe Camera Raw, Photoshop, and Nik Silver Efex Pro (a Photoshop plug-in).

1. Adobe Camera Raw: Decrease the Brightness and increase the contrast to help bring out some of the detail. 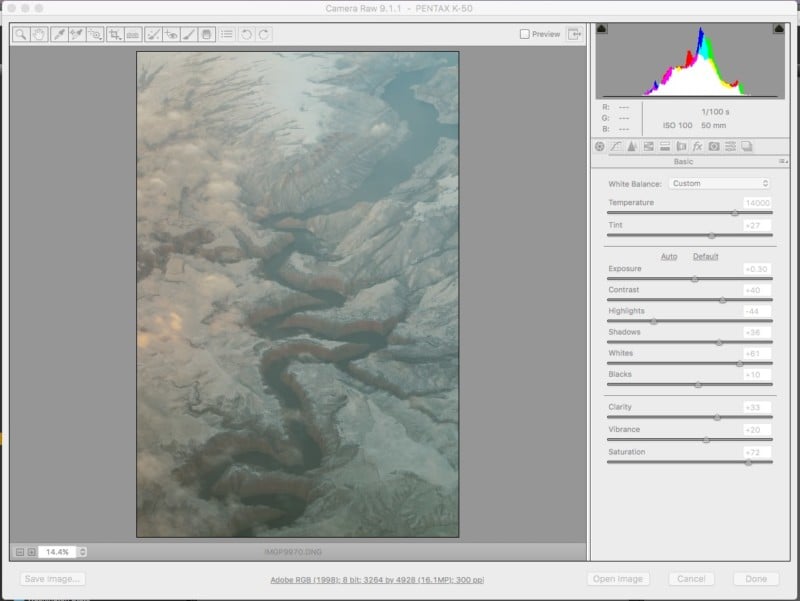 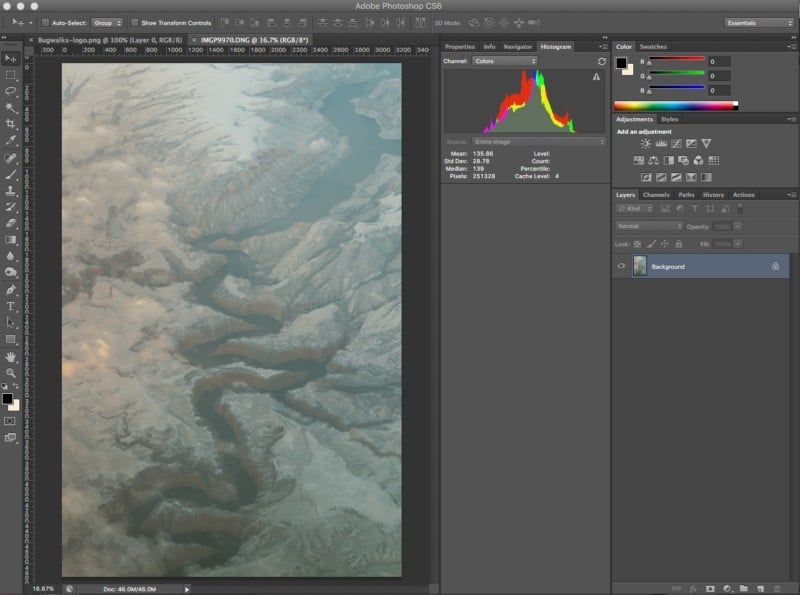 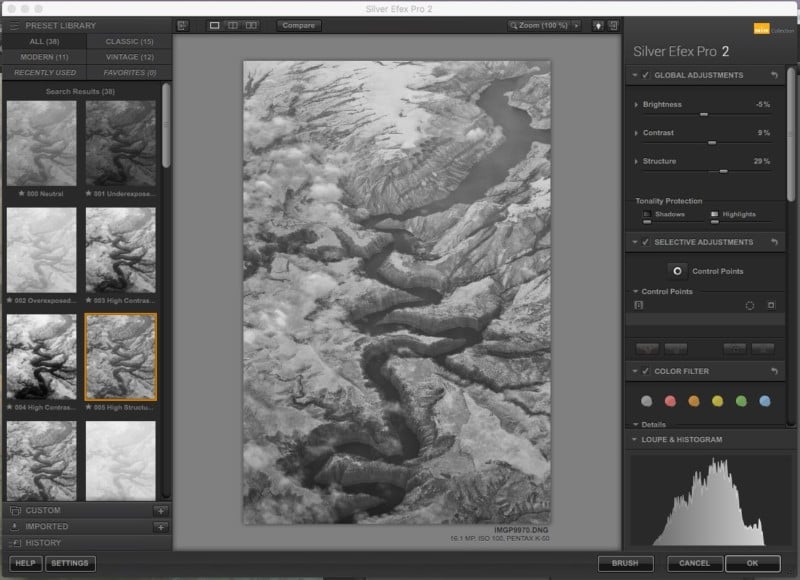 4. Photoshop: Bring the Silver Efex layer in above the original layer. 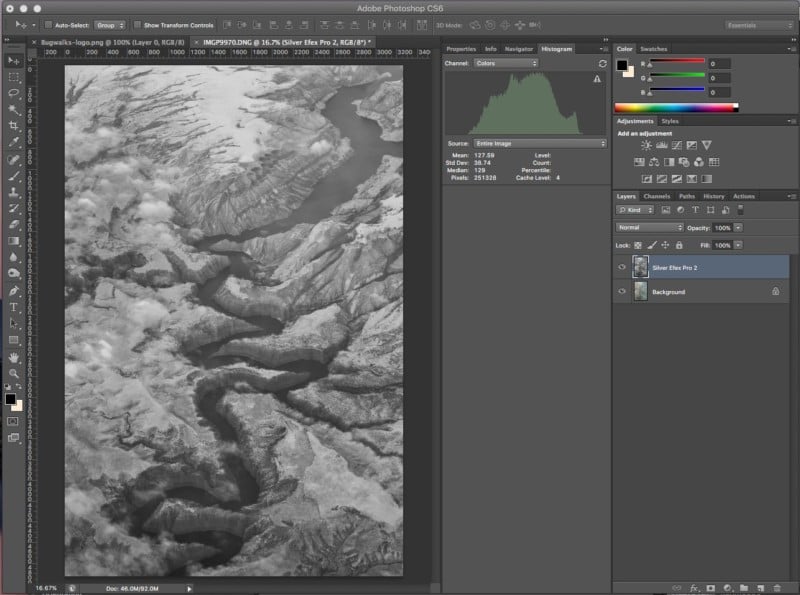 5. Photoshop: Change the Silver Efex Layer blending to Luminosity and reduce the opacity to adjust for the best mix of clarity and color. 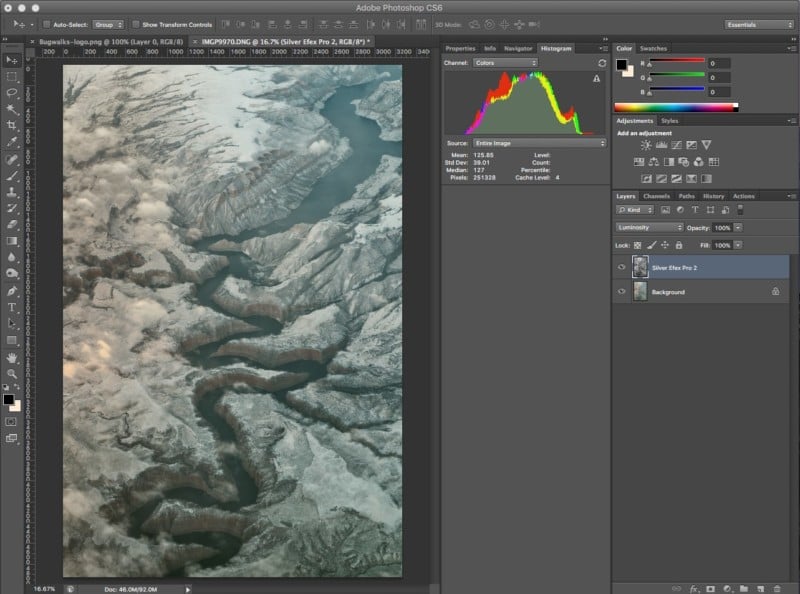 6. From this point make color and level adjustments according to your style.

Hopefully, this information will prove useful if you decide to bring a camera along for your next airplane trip to try your hand at shooting photos out of an airplane window.

About the author: Curtis W. Smith has broad photographic interests ranging from travel and landscape to motorsports. He is based in Kingston, Washington and enjoys being outdoors with camera rain or shine. You can find more of his work on his website and Instagram.

Image credits: Header photo from Depositphotos. All other photos by Curtis W. Smith.