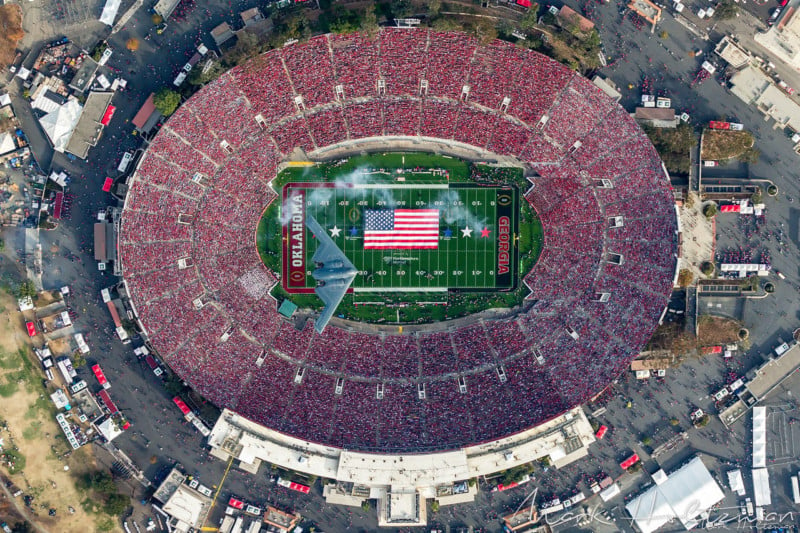 During the 2018 Rose Bowl college football game between Georgia and Oklahoma this past weekend, photographer Mark Holtzman managed to capture an amazing and unusual photo: he took a picture of a stealth bomber flying over the stadium from above it.

The picture shows the B-2 stealth bomber passing over the football field as a giant US flag is proudly displayed on the turf below.

The Atlantic reports that Holtzman shot this photo while nearly hanging out the window of his plane.

Holtzman has spent years flying around in a Cessna 206 single engine airplane for aerial photos.

“The plane is my tripod, and it is a moving tripod,” Holtzman tells The Atlantic.

As Holtzman above the Rose Bowl, he used his airplanes rudder pedals to guide the plane into the right position as the B-2 bomber flew toward him at 200 miles per hour. As the two airplanes passed, Holtzman pointed his Canon 5D Mark III and 70-200mm lens out the window of his airplane and started shooting.

Holtzman says he received clearance for his flight and was speaking to the B-2 during the shoot. The bomber was flying at an altitude of about 1,000 feet, and Holtzman was flying his airplane at about 2,500 feet.

“I’m moving the plane around and sticking my head out the window,” Holtzman tells The Atlantic. “And then I’m moving the plane, kicking it around left and right to get what I want. It’s not like I’m in a blimp right above it waiting for it to fly.”

Image credits: Photographs by Mark Holtzman and used with permission

Portraits of India: Capturing Faces That Reflected Myself