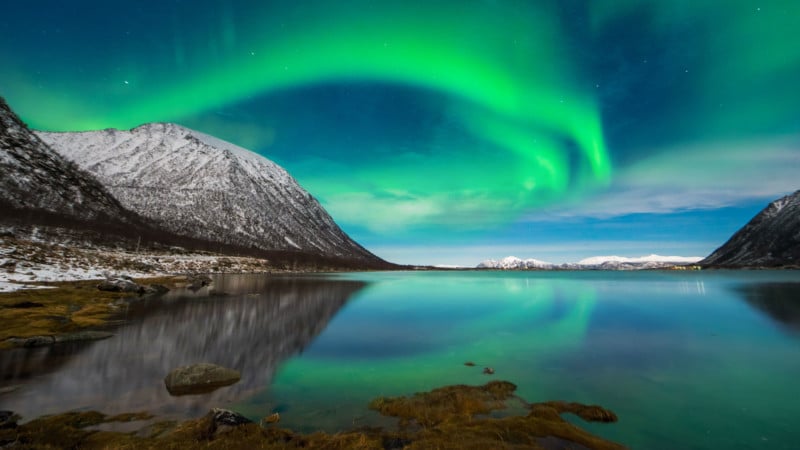 The northern lights, otherwise known as aurora borealis, are the winter-time spectacle that sees northern skies filled with incredible dancing lights. Caused by the interaction of photons exciting the gas molecules in Earth’s atmosphere, they can appear as green, pink, or blue. Photographing them is near the top of almost all photographers’ wish lists, but getting a good shot is decidedly difficult.

The earth’s magnetic field forms poles in the north and south, but seeing that most of the Antarctic is uninhabited, I’ll be discussing the northern lights exclusively here, but the same principles can be applied to the southern lights (aurora australis) should you find yourself down there.

As a photographer who’s been lucky enough to photograph them more times than I can count, I’ve traveled around the world in search of this holy grail of astrophotography. Of course, there’s a certain amount of luck involved as it’s incredibly difficult to pinpoint when and where the northern lights will display, but there’s also a lot of preparation you can do to ensure you maximize your chances of getting a photo. I’ll be taking you through this prep and pointing out some key bits of kit you’ll need before setting off. Plus, I’ll also discuss the best camera settings to use for northern lights photography. So let’s take a look at how to find them.

First off, if you think you’re going to capture the northern lights from an equatorial country, think again. The best locations are around or inside the arctic circle. That makes countries such as Iceland, Northern Norway, Sweden, Finland, Canada, Greenland, Russia and USA ideal. Although, when there’s an intense solar storm it has been known to be seen as far south as the Caribbean (check out the Carrington event of 1859) but that’s a rare occurrence.

Track the weather. Use a forecasting service such as the MetOffice, or Accuweather to find when clear skies are expected in your chosen location. It won’t matter how strong the aurora is if there’s a bank of cloud covering it up.

Map out the darkest skies by using a site like Dark Site Finder or visit the International Dark-Sky Association to avoid places with light pollution. Generally though, the closer you are to a built up area or city, the more light pollution will occlude your views. When you have clear skies look for the aurora due north. A thin band of green is quite common in the north but can be seen all over when there’s a good display.

Keep your finger on the solar pulse. Download an aurora forecasting app such as My Aurora Forecast (iOS or Android) which can tell you the Kp strength of expected auroras and give notifications on when you should head out to shoot. Alternatively, use the Space Weather Prediction Center for short-term forecasts and aurora models. There are also some dedicated aurora tracking Twitter accounts that tweet when there’s a possibility of viewing aurora.

Once you’ve found the right spot and made sure skies are clear, you’re ready to start shooting. But there are some essential pieces of kit that you’ll need before you can capture the dancing lights.

Accessories That Help But Aren’t As Essential

There are a few pieces of kit that can make photographing the northern lights much easier, but you can get away without them. Think of it more as a list for those who’ll head out frequently during the winter months to capture the northern lights.

How to Focus In the Dark

Typically, autofocus struggles to work in the dark, and will hunt back and forth and usually end up giving you a blurry photo. That’s why it’s important to take control and use manual focusing techniques to ensure everything is tack-sharp.

Below are some top camera settings tips for when you head out shooting the northern lights next. But be aware that light conditions and sky darkness influence the optimum settings for your particular photoshoot. As a result, these are just starting points and you’ll need to adjust them accordingly.

Shooting a hundred photos of the sky may well record some northern lights, but without sufficient context, it makes for dim viewing. That’s why it’s important to use some compositional framework to compose your shots.