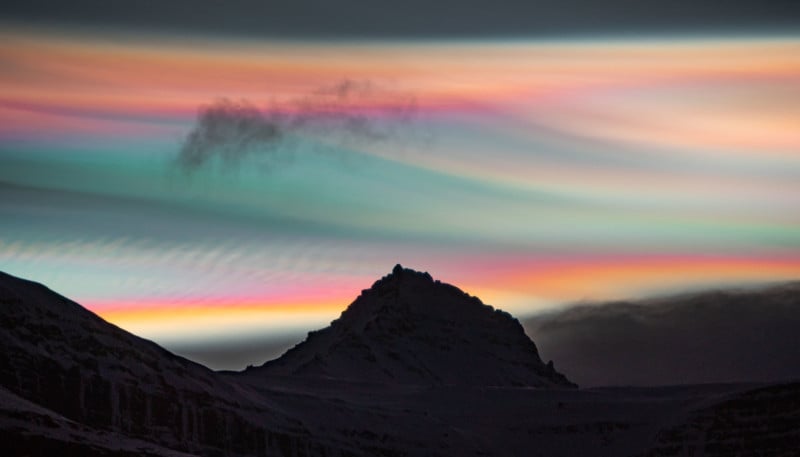 A photographer captured a rare and colorful nacreous cloud in the arctic stratosphere yesterday that are sometimes mistaken for the aurora lights.

Jónína Óskarsdóttir from Iceland captured the vibrant nacreous clouds that only form when the temperature is lower than minus 121 degrees Fahrenheit (minutes 85 degrees Celsius).

“Nacreous clouds are so special that you know right away,” Jónína tells PetaPixel. “Often they glow like silver in the middle of the day but when the sunset is near they change to various glorious colors.”

According to Space Weather, high-altitude sunlight shining through the crystals creates sparkling colors which lead to people mistaking them for the auroras. 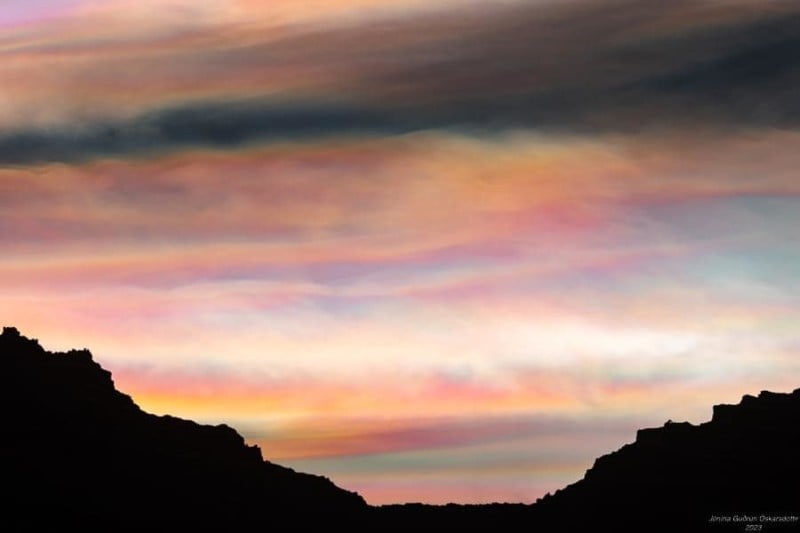 “I wanted to share with you the view from my balcony today,” Jónína writes on her Facebook page. “Those clouds are polar stratospheric clouds. Not northern lights but gorgeous to witness.”

Jónína lives in Fjardabyggd on the east coast of Iceland where there are only 700 inhabitants.

“You can’t see the sun from 17th November until 28th January because of the high beautiful mountains,” says Jónína.

“During that time the sky is something extra. The most beautiful sunrises can be seen. I’ve seen Nacreous clouds from late December until late January.”

Jónína regularly captures stunning views of the northern lights that she takes within a five-kilometer radius of her remote home in Fjardabyggd.

“I am a nurse and work full time as a health care professional manager at the east coast of Iceland,” she says.

“But I use as much time as I can to carry my camera equipment with me trying to find something to photograph. I love the mountains around, the beautiful sky, I love the Moon.

“I go down to the shore to take photos of birds. You sometimes see Arctic foxes and this time of year I can expect to see between 100-200 reindeer at my property 15 kilometers away. Harbor seals can often be seen during wintertime. So for me, there is a lot of [photo] opportunities.”