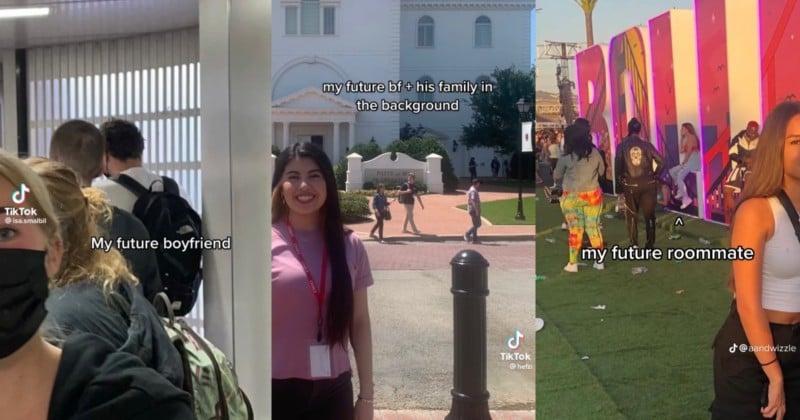 The ubiquity of cameras is making crazy coincidences the norm — as a TikTok trend sees people finding photos that they took of their future loved ones before they had ever even met.

In videos shared on TikTok, social media users look through their old photos — only to discover that their future partners, best friends, and roommates can be spotted in the background of the images.

TikToker Isa reveals how she posed for a casual photo before boarding a plane. Eighteen months later, she unearthed the photograph and realized that her now-boyfriend could be seen in the background of the image.

In another clip, creator Hefzi stumbled upon a live iPhone photo that she took at her freshman orientation. Against the backdrop, her future boyfriend-of-one-year and his family casually walk across the shot.

In another viral video, TikToker Debs uncovered a selfie she took on holiday in Italy years before in which her sister’s future husband can be seen in the background.

While Thuy An Nh tracked down a picture taken in 2021 in which her now boyfriend can be seen towering over the huge crowd.

Meanwhile, Anu Vasireddy realized that she unwittingly took a photo with her future roommate and best friend in the background before they met.

Similarly, TikToker Amelie revealed how her new roommate was the “moody girl” in the crowd in an old photo she had posed for with friends.

Likewise, TikTok user Andrea shared a photo that she took at Rolling Loud Festival in California in 2019. After moving to a different city three years later, she realized that her future roommate could be seen in the background of the image.

In Andrea’s picture, her roommate can be seen posing for her own photo too.

The popularity of buying second-hand technology and used cameras are also leading to wild coincidences.

@blondebitchi My boyfriend and I were so scared I called my dad immediately #viral #scary #haunted #fyp #newyear #trending #trend ♬ Ev3ry0ne i5 always c0nnect3d – :/\

In a slightly more eerie video, TikToker Jacey made a discovery more shocking than most when she purchased a second-hand camera in a Goodwill store in Arizona.

When she looked at the photos on the SD card, there were images of her father on it. This was even more strange given that her father lives far away in Idaho.

“My boyfriend and I were so scared I called my dad immediately,” she writes in a caption.

More Connected Than Ever Before

This recent TikTok trend is a telling sign of how the widespread use of cameras and smartphones has made people even more connected to each other than ever before.

Given the ubiquity of photos and selfies in individual daily life, it is perhaps no wonder that social media users are finding that they have previously crossed paths with future loved ones and inadvertently taken a picture of them.

When almost everyone has a camera in their pocket, unexpected chance encounters are in fact becoming expected.