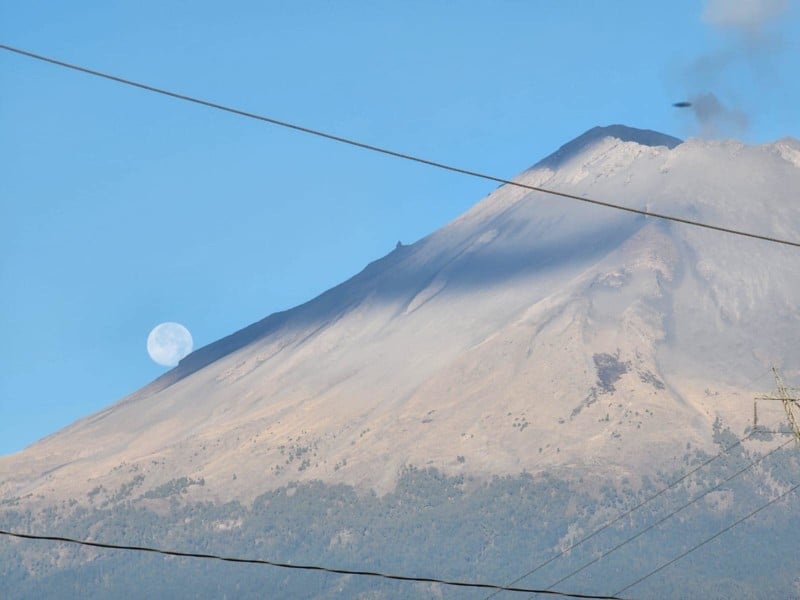 A photographer couple sparked an internet frenzy after they captured an image that appears to show a “UFO” above an erupting volcano.

The photograph shows a disc-shaped object hovering above the right side of the 10,000-foot Popocatépetl volcano near Atlixco, Mexico.

The image, which was taken at 07:52 on Monday, has gone viral online — with many social media users claiming that the flying disc is an unidentified flying object (UFO).

Since moving to Atlixco, Mexico, Karla García, and Luis Guerra have taken up photography and the couple often take pictures of the nearby active Popocatépetl volcano when it is erupting.

As Guerra and García were preparing breakfast on Sunday morning, the couple was startled by a blast from the Popocatépetl volcano.

According to the Daily Mail, Guerra immediately started taking pictures of the volcano on his cell phone, zooming in on the full moon to the left side of the cliff that spans across the State of Mexico, Puebla, and Morelos.

Guerra liked how this particular photo uniquely showed the full moon peeking out from behind the smoking volcano and thought it made an interesting shot.

Later that day, he sent the photo to his girlfriend García and she shared the image on her Whatsapp feed.

Although she initially did not notice anything unusual about the photo, she started receiving several messages from friends who noticed the UFO.

García tells the Daily Mail: “Since my boyfriend is not a fan of social networks, I asked him if I could upload his photo to Twitter and he said yes.”

She shared the photo on social media and tagged a local reporter, who proceeded to share the image on their local network before it went viral.

García also posted the photo on her Facebook page, writing, “Today’s photo at 7:52 am. Popocatépetl, the moon, and possibly a UFO.”

PetaPixel previously reported on a photographer who sparked concern when he posted photos of “aliens” emerging from the sea in South Africa.

Photographer Jan Vorster even began receiving messages asking if the beach where he took the pictures was safe to visit.

However, the ominous photos actually show dead aloe vera plants and not aliens.