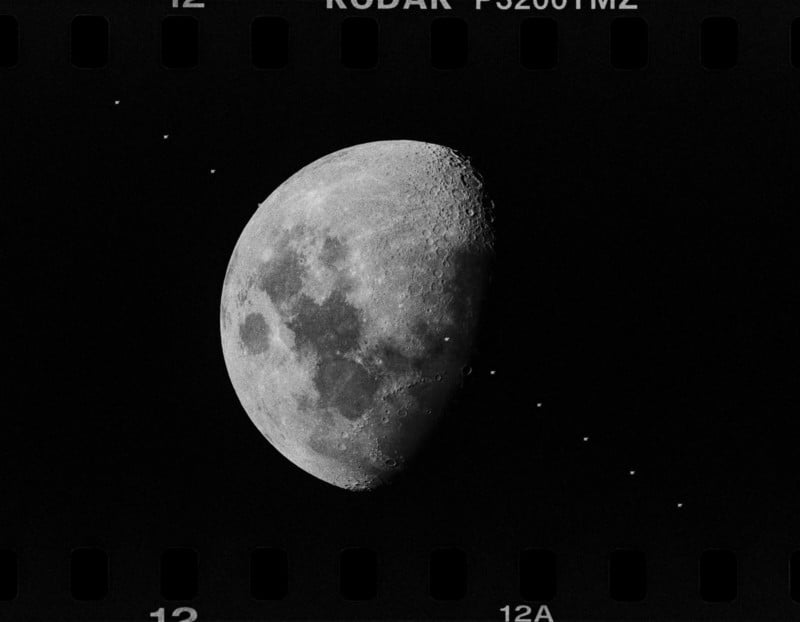 Catching the International Space Station crossing the face of the Moon is quite challenging these days even with advanced cameras and relatively affordable telescopes, but one photographer decided to take things to the next level by catching an ISS lunar transit on 35mm film.

On New Year’s Day, De Freitas decided to go out with his telescope and Nikon F5 SLR loaded with Kodak P3200 film and capture an ISS lunar transit. He drove 8 hours from his home to Newcastle, NSW, Australia, for weather and a vantage point that would allow him to observe the transit.

Shooting this project on film rather than digital presents a unique set of challenges.

“While it’s possible to get fantastic results using shorter focal lengths on digital cameras and cropping in, the large grain size of 35mm means you want to avoid cropping as much as possible,” De Freitas tells PetaPixel. “This requires a lot of focal length – around 2000mm to fill up the frame with the moon.

“You also want as much light as possible to keep the shutter speed fast, so lenses and teleconverters aren’t the greatest option. A telescope is obviously ideal and I used my Celestron EdgeHD 8 which has a focal length of 2032mm and touts a flat field across full frame. The focal ratio is f/10 which is enough to make this possible.”

Another challenging aspect is how quickly the transit happens.

“The ISS crossed the moon in just 0.83 seconds during the transit I photographed and I wanted to capture it in as many frames as possible,” the photographer says. “The camera of choice I settled on was the Nikon F5 which is aptly the last 35mm SLR that NASA used in space (albeit they used a digital back on the ISS).

“It can shoot up to 8 frames per second which meant I was able to get 14 shots of the ISS in my field of view.”

De Freitas is very experienced with doing analog astrophotography, having previously captured the Milky Way on medium format film, a Milky Way timelapse, the ISS passing between Jupiter and Saturn, and a timelapse of a total lunar eclipse. Even still, shooting the ISS in front of the Moon was perhaps the most technically challenging concept yet.

“Capturing this transit on film was a challenge of balancing exposure, speed, and grain size,” De Freitas says. “Film is quite limited in sensitivity and in order to freeze the ISS in the frame, a high shutter speed and high ISO film stock are needed.

“The trade-off here is that the grain size increases with higher ISO films. With the ISS being so small in the frame, the large grain size of high-speed film really starts to get in the way of achieving any detail on the ISS. My goal was to use the slowest shutter speed before incurring any significant motion blur so that I could develop the film at a lower rating.”

“It is actually an EI 800/1000 speed stock designed to be push developed at 3200 – ‘pushing’ essentially meaning overdevelopment,” he says. “I determined the exposure settings by observing an ISS flyover a few days earlier of similar brightness magnitude and the shutter speed I chose was 1/500” and the development to be for EI 1600.

“This is a slower shutter speed than usually recommended but based on the large grain size I believe I was right at the limit of ‘freezing’ the ISS.”

Here’s a 2-minute behind-the-scenes look at how De Freitas set up and accomplished these shots:

De Freitas is just one of many, many photographers these days opting to shoot film despite the relative ease and simplicity of digital.

“There are zero technical advantages for using film, it’s purely motivated by passion for the medium and the craft,” the photographer says. “Film is what led me to fall in love with photography itself and I enjoy challenging myself with it. There is something enjoyable about using a camera as old as the space station itself but really it’s the combination of my love for analog photography and my love for space.

“Creating tangible artifacts in the form of negatives and prints really transforms the impossibly far away beauty of space into something I can interact with an experience. It brings it into my own personal reality of the universe.”

You can find more of De Freitas’s work on his Instagram and website. You can also purchase his ISS lunar transit image as a beautiful print.