Last week, Twitter announced that they were adding view counts to tweets on Twitter. I thought I’d use the announcement to very unscientifically compare the number of views one of my photos received on Twitter vs. Flickr.

After almost 24 hours of posting the two exact same photos at the same time (on a Thursday evening) on both networks, the results were in. 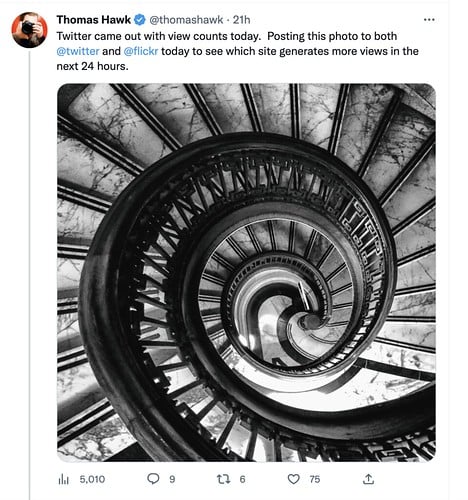 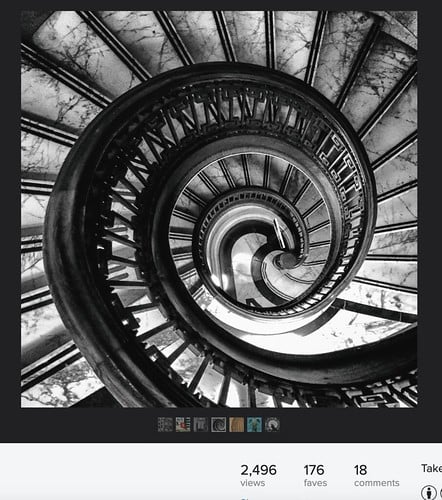 There are other metrics to look at as well.

I’m not sure exactly what any of this means other than while my photo got 2x the number of views on Twitter, it also got 2x the amount of engagement on Flickr (as measured by likes and comments).

I didn’t do anything special to promote either of the two photos myself other than engage in the comments on each as I normally would. Other than posting a link in my Flickr group American Photographer, I didn’t post anywhere else on either link. I also put the photo into the pool in American photographer and added it to other groups as invited on Flickr (I would normally do this anyways).

I should also add that I don’t know exactly what constitutes a “view” on either platform. I’m assuming that both platforms apply the term as liberally as possible and it’s meant to mean any time your photo was seen anywhere on either site on a computer, tablet, or phone screen.

A day after the 24-hour mark, the photo hit Flickr’s popular Explore page where Flickr each day prominently features 500 photographs from the site. This caused this photo’s view count to rocket higher on Flickr.

As of the morning of the two-day mark, the view count comparison stood at:

I do regularly have photos featured in this popular area of Flickr. Since I’ve been using Flickr, in fact, 963 of my photos have been featured in Explore.

About the author: Thomas Hawk is a photographer and blogger based in San Francisco. The opinions expressed in this article are solely those of the author. Visit his website here and his Flickr photostream here. This article was also published here.