Ryan McIntyre from Cinespeed tells PetaPixel that he was hired to shoot a segment for a documentary about the Japanese Civil War, which took place not long after the American Civil War ended in 1865.

“The purpose of the highspeed shoot was to compare the Napoleon cannon with the newer and more advanced Parrott rifle,” he says.

“NHK [a Japanese broadcaster] wanted to show how much better the Parrott rifle was by showing how much energy the Parrott round had even after going through seven 55-gallon drums.” 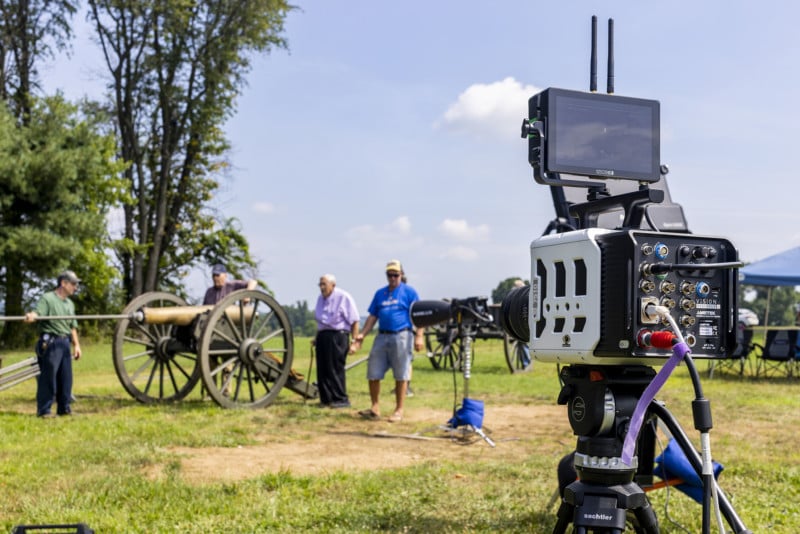 The documentary makers requested a shot where the cannonball is flying toward the camera to show the differences in rotation and shockwaves of the two projectiles.

“To achieve this we set up a mirror down range between the backstop and cannon,” explains McIntyre.

“We then angled the mirror slightly and aimed the camera and cannon right at each other. Before we loaded the cannon we lit and set a focus point between the cannon and mirror to where we wanted the projectiles to come in focus.

“If you look at the end of those mirror videos, you can see the actual projectiles come into frame briefly and shatter the glass.”

To light the scene, McIntyre and his crew used bright Nanlux lights.

The video was filmed in a closed firing range in Lancaster, Pennsylvania and a specialized team came to fire the cannons.

The resulting clips were included in the documentary entitled End of the Endo Period, an NHK production that is only in Japanese.