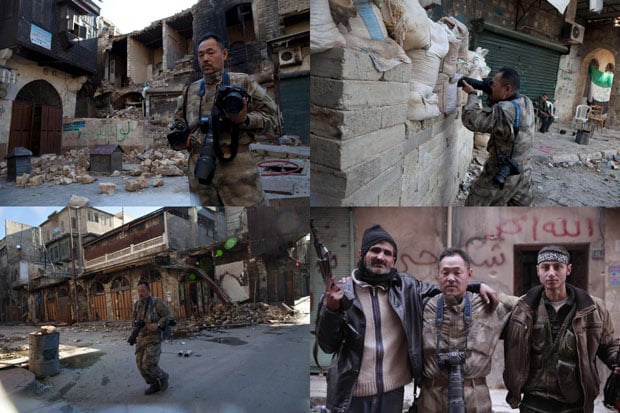 When you mention the words “vacation photos,” most people might think of trips to the mountains or to the beach. Not Toshifumi Fujimoto. The 45-year-old Japanese trucker is passionate about “war tourism” — he actually takes on the role of a conflict photographer when on vacation. In recent days, he has been shooting on the front lines of the Syrian civil war, putting his life on the line for images that he keeps as a personal collection rather than sells for reportage purposes.

Prior to the Syrian conflict, he was photographing demonstrations in Yemen and Cairo. After Syria (which he snuck into from Turkey), he plans to visit the Taliban in Afghanistan.

In an interview with Agence France-Presse, Fujimoto is quoted as saying,

I always go by myself, because no tour guide wants to go to the front. It’s very exciting, and the adrenaline rush is like no other […] It’s more dangerous in Syria to be a journalist than a tourist […] each morning I walk 200 metres (yards) to reach the ‘front’, and I’m right there on the firing line with soldiers of the (rebel) Free Syria Army […] It fascinates me, and I enjoy it […] Most people think I’m Chinese, and they greet me in Chinese

I’m not a target for snipers because I’m a tourist, not like you journalists […] Besides, I’m not afraid if they shoot at me or that they might kill me. I’m a combination of samurai and kamikaze.

Fujimoto finances his trips entirely by himself, and doesn’t have the responsibility of caring for any family members (he is divorced and says he has no friends). 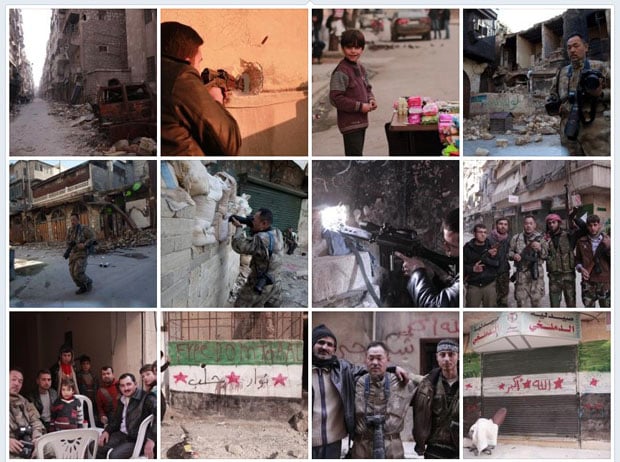 You can view Fujimoto’s war photographs over on his Facebook page, where they’re mixed in among other rather ordinary photographs of his daily life. Be warned though, many of them show carnage and corpses.