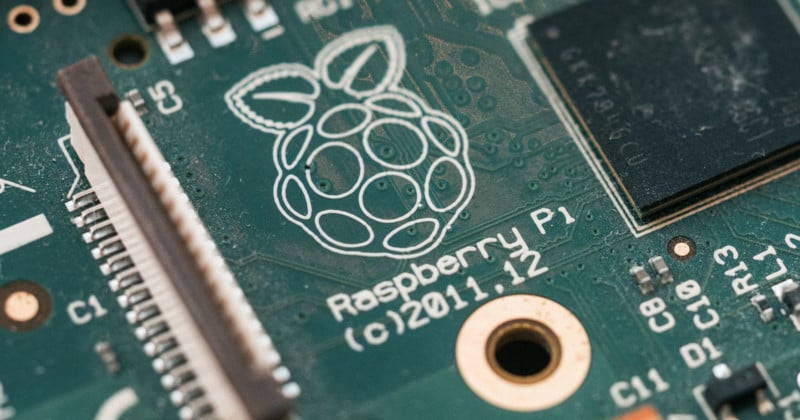 Raspberry Pi, makers of single-board computers and tiny cameras, has come under fire from members of its user base that are upset the company hired a former police officer who used the products to covertly surveil targets.

Raspberry Pi’s products are used by a wide range of creators and the tiny computers are often the core of many custom camera projects, like the M-mount Pieca or other custom-made systems. Raspberry Pi itself is a camera manufacturer since it produces a 12.3-megapixel module that accepts interchangeable lenses.

The company unveiled its new “Maker in Residence” Tony Roberts yesterday on its blog and introduced him as a former police officer who had experience using the company’s products in the past as the backbone of surveillance equipment.

We hired a policeman and it's going really great.
Meet our Maker in Residence, @TobyRobertsPi.https://t.co/DA4KYVAd8J pic.twitter.com/19h1WDF6b5

“I used to be a police officer tackling serious organised crime and terror threats across the east of the UK,” Roberts says. “I was a Technical Surveillance Officer for 15 years, so I built stuff to hide video, audio, and other covert gear. You really don’t want your sensitive police equipment discovered, so I’d disguise it as something else. The variety of tools and equipment I used then really shaped what I do today.”

raspberry pi hired a cop who used raspberry pis to build surveillance tech, and is now being flippant towards and blocking anyone who is less than jazzed about that decision

“You’re basically telling me and people like me who do privacy work and activist work that you’re anti-that,” Bowser tells Buzzfeed, encapsulating the general reason behind user pushback.

“You’re alienating a large chunk of your customers by going pro-cop. The company clearly doesn’t know how their products are being used in the world. A lot of people who use it are anti-authoritarian, anti-surveillance, and don’t like police brutality. And they’re actively building tools using the Raspberry Pi and others against those things.”

More than the hire, it appears to be Rasperry Pi’s response to criticism that has most users upset. Multiple users on Twitter are reporting that in response to voicing concerns, the company is blocking them.

“A computing company hired a cop who turned your RPis into spy devices. You expect people to continue buying your computers which DEFINITELY AREN’T spying on them?” Twitter user Azuaron writes. “Why would we trust your computers now?

“How can you so badly misunderstand the market you’re in?” Azuaron continues. “Most RPi customers aren’t cops, they’re small time makers and social outsiders that are trying to avoid major manufacturers due to their constant tracking and exploitation of our data, aka PEOPLE WHO HATE SURVEILLANCE.”

If the company isn’t outright blocking users, it is supposedly responding in a way that doesn’t appear to take complaints seriously.

The @Raspberry_Pi Foundation replied with a lot of snakiness to their community members in which I mentioned perhaps that was not the smartest thing from a business and community perspective as you can see.
Following that, (2/3) pic.twitter.com/84QNCyLu0j

after years of contributing to translations attending @CodeClub events and contributing to open source projects used by the Pi the @Raspberry_Pi Foundation goes and blocks me for expressing my opinion. The same people who preach "Computing for everybody". (3/3)

Raspberry Pi’s co-founder and chief marketing officer Liz Upton tells Buzzfeed that she believes much of the blowback stems not from the issues presented above, but a picture the company posted to Mastodon that shows pigs in blankets, as well as the fact the company is currently struggling with supply chain issues and users, were already upset about that.

“I think what we’re looking at is a dogpile that’s being organized somewhere,” Upton tells Buzzfeed. “There’s obviously a Discord or a forum somewhere.”

Upton did not provide any evidence to support that claim. Buzzfeed’s full report can be read here.