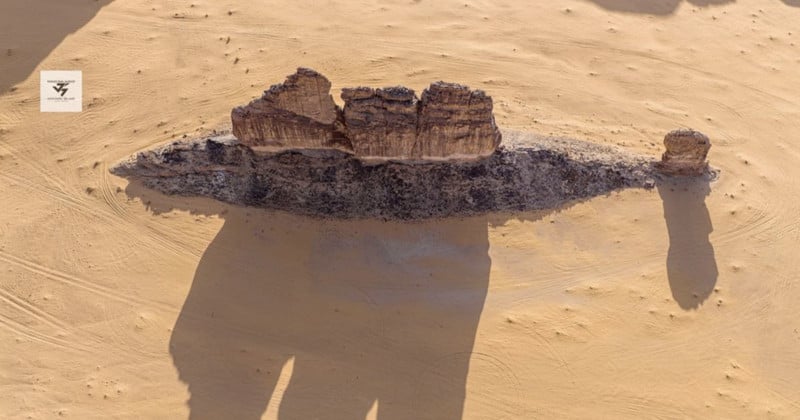 A photographer flying his drone above the desert in Saudi Arabia discovered a huge fish-shaped rock in a remote location.

Khaled Al Enazi was flying his DJI Mavic 3 in Saudi’s Al-Ula county when he discovered the unusual formation which he dubs “Desert Fish.”

“While I was documenting the area, a view of a mountain appeared in front of me, its shape suggesting a fish in the heart of the desert,” he tells CNN.

Al Enazi says that his aerial view was able to reveal a new perspective on the rock that has probably been seen by other people before him.

“A photographer’s eye sees what people do not see,” he says.

Sensational footage makes the rock formation appear like a fish partially emerged from the sea with its dorsal fines and tail sticking out.

Some social media users even went as far as to suggest that the rocks are the remains of some prehistoric sea beast.

“Some have mentioned that it is a real fish that was fossilized millions of years ago, but that’s not the case,” he says. “It is sandstone formed by many factors.”

“Godzilla made it to Saudi Arabia,” writes one user.

Al Enazi has spent a lot of time in the 9,000 square miles (22,000 square kilometers) desert capturing the Jabal Al-Fil, otherwise known as the Elephant Rock because of its resemblance to a Proboscidea.

Some of Al-Ula’s rocks, carved by the elements, have taken on surprisingly sculptural, and human, forms. The walled city of Al-Ula was founded in the 6th century B.C. thanks to its fertile soil and plentiful water, an oasis in the desert.