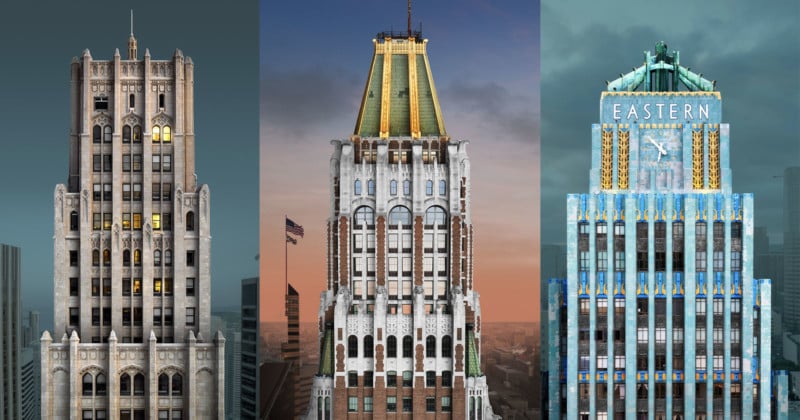 A photographer uses a drone to capture these unique images of beautiful highrise buildings across the United States.

Chris Hytha tells PetaPixel that he initially thought he would be shooting his Highrises project on a DSLR from adjacent rooftops but instead settled on using a DJI Air 2S drone.

However, using the drone was not straightforward and threw up a plethora of problems with each image taking hours to complete.

“The problem is drones shoot in landscape orientation, but I felt it was essential to have vertical compositions,” he says. “This works conceptually, as these buildings reach tall into the sky.”

As Hytha explains on a Twitter thread, drones don’t have comparable image quality to DSLRs and he wanted “crispy” images.

“To solve this problem, I developed a technique of taking several RAW files in landscape orientation progressively up the building facade, then stitching them together,” he says.

Before committing to using the drone for Highrises, he had to complete an FAA knowledge test to obtain a part 107 drone license.

“A whole facet of this project is coordinating with the FAA to get airspace approvals. For every trip I plan, there is a ton of work checking airspace as well as DJI geolocked zones. As drone regulations continue to tighten, projects like this will be less feasible,” he adds.

After overcoming all of the bureaucratic hurdles, Hytha could start shooting. A process that sees him fly the drone up the building, collecting around 15 RAW files which are later stitched together.

9/24
– The Raws –
These were shot at sunrise this morning. I always aim for soft lighting that clearly defines the form of the building. I take a photo at each floor level, or at any "Moment of interest" like cornices so I make sure they are sharp in the center of the fame. pic.twitter.com/TWriimvBJi

The editing suite is really where the magic (and hard work) happens. Hytha says that the stitching process flattens the perspective of the building “creating a semi-surreal effect reminiscent of architectural elevation drawings.”

“The process of doing this is very tedious. Because the drone moves slightly as it ascends, each frame is manually shifted and scaled into place, then blended with the previous frame,” he explains.

Any photo editor who has ever tried to line up two different photos taken from slightly different angles will know how difficult it is to make the image look coherent.

“My technique is tricky because the image contains like 14 horizon lines with various converging perspective points,” he says. “Lots of warping is required to make it work.”

The final element is placing his main composite into a background.

“When I shoot, I always get images of the surrounding area to composite into the background. I usually scale these up to create the effect of a longer focal length,” he says.

“The background image is never tall enough to cover the frame, so I also get some sky images to fill in the void.”


Finally, after some standard photo editing tweaks on the image’s overall lighting and color, it is finished.