Most professional portrait photographers exclusively use strobes for a variety of reasons, but commercial photographer and director Isaac Alvarez explains that in some circumstances, there are still reasons to use constant lights.

“It’s no contest between strobe lights and constant lights when it comes to power output. A strobe light will easily battle the brightness of the sun on a cloudless day,” Alvarez says. “But when shooting indoors, where the light isn’t as bright, constant lights can certainly hold their own in a photo session.”

The main advantage of constant lights is that they allow photographers to see how a photo will look before it is taken. It makes it easier to envision a scene as well, since any changes made to the lighting arrangement are immediately visible.

“There is the option of working with beauty lights to gauge where the light will be hitting your subject. But these lights only provide a preliminary view, and not the final result.”

It’s not all good news though. Constant lights, also called hot lights, are also generally not as bright as strobes, tend to be bigger and heavier, and are therefore more difficult to move around and reposition.

“The other con is that constant lights are just that: constant. Therefore, having a bright source constantly hitting your subject, instead of a quick and painless split-second flash, may start to make them uncomfortable or hurt their eyes,” Alvarez says.

“This is especially true if there are no light modifiers in front of the light, maximizing how harsh it can be. So when working with such lights, it should be considered how bright your key light needs to be to get the result you want, while making sure the subject can sustain themselves for a prolonged period of time in front of a bright source.”

This was all taken into consideration when Isaac Alvarez used constant lighting during a photo session with Vivica A. Fox. Because Fox is an award-winning actress, she is very used to working in front of a ton of lights.

Alvarez opted to use the less popular hot lights in three setups featuring Fox, which he explains below. 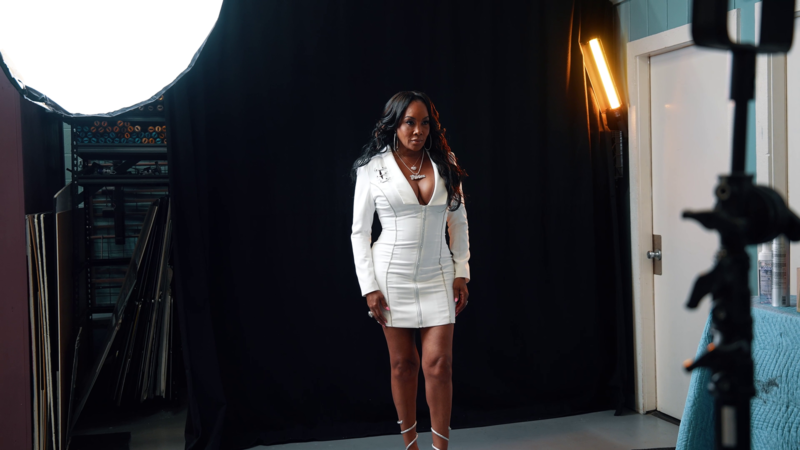 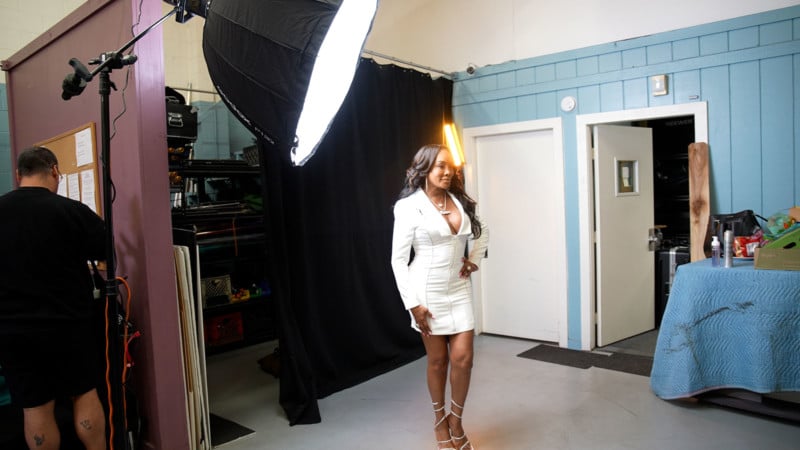 “The first setup involved just two lights: a Godox FV150 with a P120L dome, acting as Vivica’s key light, and an LC500R light stick, which acted as the hair light,” Alvarez says. “Next to Vivica was a closed white door, which acted as a bounce board to fill her opposite side. Behind Vivica was a black curtain, which I decided to use as the backdrop to completely isolate the subject.” “The second setup was aimed to look more industrial. Isaac had Vivica placed in front of some power boxes, cables, and a ladder. The LC500R, again, was used as a hair light. The FV150 with P120L dome were placed slightly behind her as a fill. Alvarez says he set up another FV150 with a QR-P90 dome and a Blue Lagoon gel covering a portion of the light to give his signature blue tint to the subject. He says he was switching between a Tamron 35mm f/2.8 and a Canon 85mm f/1.2 RF lens for this setup. “Because there was a film team also working with Vivica, the third setup was one they had already made, and so I used it to my advantage,” he continues. “There were two 4-bank KinoFlos that were lighting the white drop. An Apurture 600D with a dome and grid directly above Vivica acted as her hairlight, and her key light was another Aputure 600D pointing towards a bounce board, and then having that bounced light pass through a silk to add two layers of diffusion.” Alvarez says that his results show that in the correct environemtns, beautiful portraits can be captured using constant lights. For more from Alvarez, make sure to check out his website and Unplug Production’s YouTube Channel.