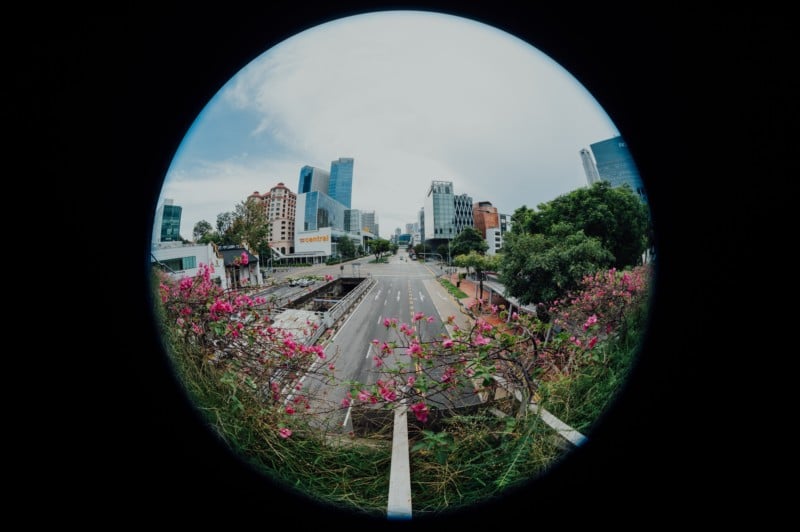 A new technology developed by Panasonic is capable of quickly correcting distortion and tilt from only one image. Using the new method, images shot at an angle or those that are distorted by a wide-angle lens can be instantly corrected.

In a report from Nikkei, spotted by Digicame-Info, an engineer at Panasonic has developed a novel method to accurately and quickly estimate the distortion of a photo and correct it with a device as simple as a smartphone — or even do it in-camera.

According to the company, up until this point, it was necessary to take multiple photographs of the same landscape in order to obtain enough data for a computer to understand how much it was distorted (which includes tilt or distortion caused by a lens). Basically, the problem with previous methods was that there was a trade-off between the number of variables and how fast and accurate software was at solving the problem. If there were many images, a computer had a much easier time fixing the distortion, but with fewer images it became basically impossible.

The engineer, named Nabuhiko Wakai, created a method that completely removed trial and error from the process, is accurate, and is significantly faster.

“Although recent learning-based calibration methods can predict extrinsic and intrinsic camera parameters from a single image, the accuracy of these methods is degraded in fisheye images,” Wakai says in the abstract of his research which he has been working on with a small team over the course of the last two years.

“This degradation is caused by mismatching between the actual projection and expected projection. To address this problem, we propose a generic camera model that has the potential to address various types of distortion. Our generic camera model is utilized for learning-based methods through a closed-form numerical calculation of the camera projection. Simultaneously to recover rotation and fisheye distortion, we propose a learning-based calibration method that uses the camera model,” he continues.

“Furthermore, we propose a loss function that alleviates the bias of the magnitude of errors for four extrinsic and intrinsic camera parameters. Extensive experiments demonstrated that our proposed method outperformed conventional methods on two large-scale datasets and images captured by off-the-shelf fisheye cameras. Moreover, we are the first researchers to analyze the performance of learning-based methods using various types of projection for off-the-shelf cameras.”

Panasonic intends to verify the method with practical tests before it decides how or if to deploy the new method. If it works as expected, the company says it will sell it to any company that wants to use it.