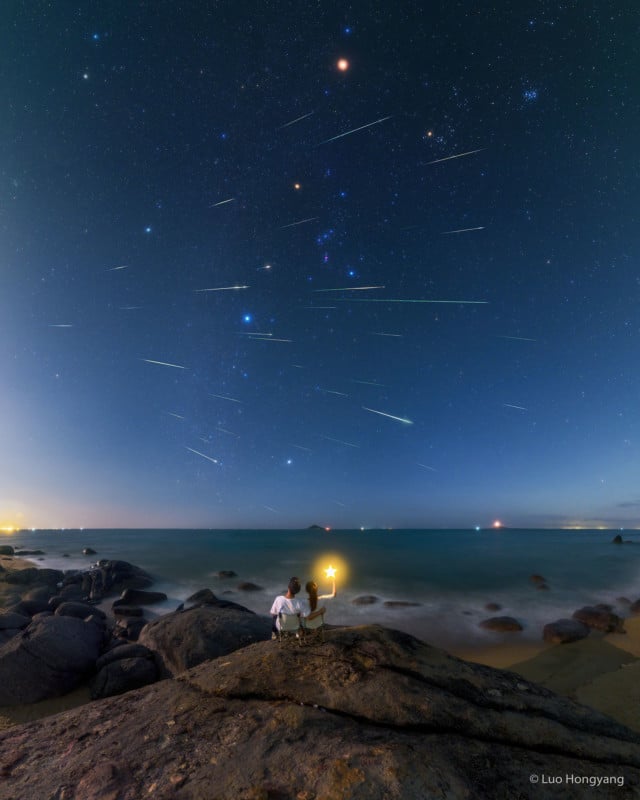 A photographer captured this incredible image of the Leonid meteor shower earlier this month that shows himself and his wife enjoying the show.

Luo Hongyang took up a beautiful spot overlooking the South China Sea and set about the complicated process of capturing and compositing nearly 40 photos into one masterful image.

Hongyang took a Nikon D810A with a Sigma 14mm Art lens attached to capture the base image. The panorama composite is made up of 13 photos.

For the meteors, the celestial shooter used three cameras; a Canon R5, Canon Ra, and a Canon 5D MK IIII which all had a Sigma 14mm ART lens attached. Hongyang set his shutter speed to six seconds.

“A total of 32 meteors in the group were selected to be superimposed and synthesized with PTGUI-aligned star points,” he tells PetaPixel.

“The meteors are covered by the other three cameras facing the sky area and captured in timelapse.”

The radiant of a meteor shower is the celestial point from where the paths of meteors appear to originate. And that night, the moon was in the way of the radiant point.

“I chose a sky area not affected by the moonlight,” explains Hongyang. This sky area has the familiar Orion, Taurus, Sirius, and so on,” he says.

“The radiant point of the Leonid meteor shower shoots out from the constellation Leo. In the sky area picture, it is the meteors radiating from left to right, and the superposition is also very beautiful.”

The remarkable image was picked up by NASA for its APOD.

Written in the Stars

Sat with Hongyang and holding an illuminated star is his wife. And the loving couple had an extra special reason for heading out that night.

“My wife and I have the same birthday. So we wanted to take a very beautiful starry sky photo to commemorate our common birthday, and finally chose the Leonid meteor shower,” explains Hongyang.

“The night when the Leonid meteor shower broke out in 2001 left an unforgettable and beautiful memory in our youth; 21 years later, although we have not seen its majesty in those years, we believe that it is still magnificent.”