Qatari officials interrupted an Argentinian TV crew filming a live segment at the World Cup as they were interviewing a soccer fan in a wheelchair.

Joaquin Alvares from El Trece was mid-interview when an official interrupted and ordered him to show his press pass while telling the cameraman to point his lens at a block of flats.

“This is what the government is like,” says Alvares’s colleagues from a studio back in Buenos Aires.

The incident came not long after a heavy-handed Qatari official threatened to break the cameras of a Danish TV crew.

Alvarez was making jokes with Argentine fans about their favorite TV channel and which show they like the best when the official and two other men appeared in the frame. 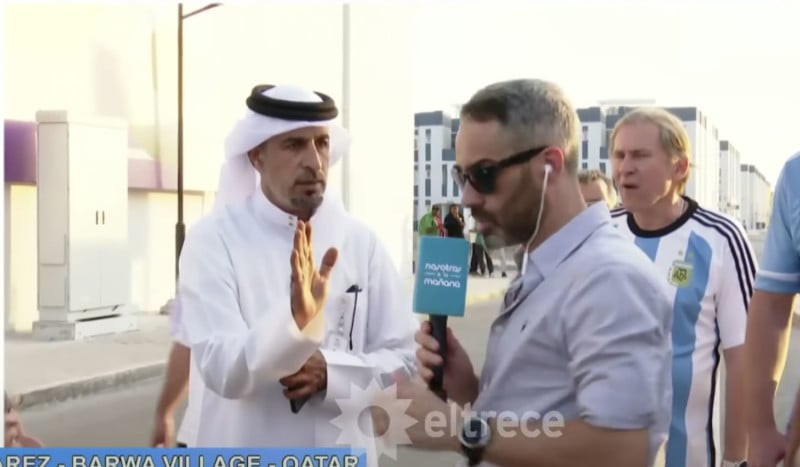 The interruption to the live broadcast took place in Barwa Village, a commercial and residential complex on the outskirts of Qatar’s capital city Doha, that was completed in 2010 and has been expanded for the World Cup.

Alvarez and his camera crew later resumed filming from the back of a car after they had been forced to leave the area.

The journalist informed viewers that he had been told where he was working was “private.” Before adding that he had all the necessary press passes and permits.

“I was frightened and thought they were going to take me prisoner,” he adds.

Rasmus Tantholdt, a reporter for the Danish broadcaster TV 2 News, received an apology from Qatari delegates after security threatened to smash his crew’s camera gear not long before the start of the tournament.

Since it was announced that Qatar would be hosting the 2022 World Cup there has been widespread criticism of the Gulf country which severely limits freedom of expression, where women live under a guardianship system, and same-sex relationships are criminalized.

The stadiums and infrastructure for the World Cup were built by migrant workers who have been widely abused with thousands waiting for unpaid wages and having suffered unsafe working conditions.