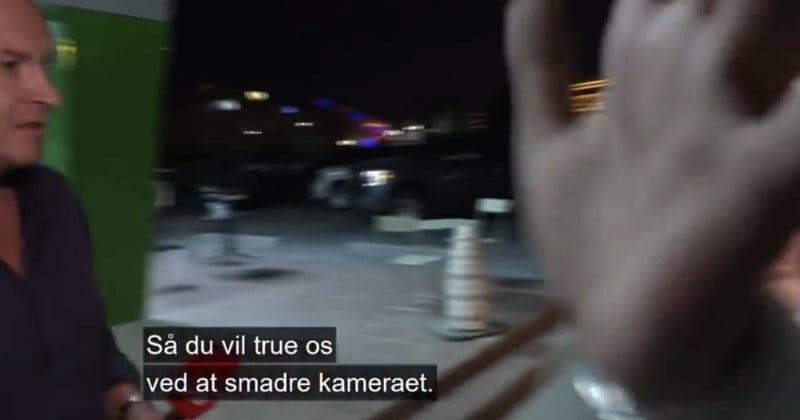 A TV crew filming a live segment for the World Cup was stopped by Qatari officials who threatened to break their cameras.

Rasmus Tantholdt, a reporter for the Danish broadcaster TV 2 News, has since received an apology from Qatari delegates. But he has questioned whether other media will receive similar treatment during the soccer tournament.

We now got an apology from Qatar International Media Office and from Qatar Supreme Commitee.
This is what happened when we were broadcasting live for @tv2nyhederne from a roundabout today in Doha. But will it happen to other media as well? #FIFAWorldCupQatar2022 pic.twitter.com/NSJj50kLql

He is speaking to a presenter in a studio back in Denmark when he is approached by Qatari security officials on a golf buggy.

When one of them jumps out and puts his hand on the camera, Tantholdt says: “Mr, you’ve invited the whole world to come here, why can’t we film here? It’s a public place.”

Tandholdt shows the officials his accreditation and states he is allowed to film wherever he wants.

An official says the crew needs to get a permit or he will break the camera. “You’re threatening us by smashing the camera,” exclaims Tandholdt.

The security officials did not smash the crew’s camera but the episode raises serious questions about the ability of journalists to carry out their jobs in Qatar.

The Danish TV presenter tweeted: “We now got an apology from Qatar International Media Office and from Qatar Supreme Committee.”

Before adding: “But will it happen to other media as well?”

Since it was announced that Qatar would be hosting the 2022 World Cup there has been widespread criticism of the Gulf country which severely limits freedom of expression, where women live under a guardianship system, and same-sex relationships are criminalized.

The stadiums and infrastructure for the World Cup was built by migrant workers who have been widely abused with thousands waiting for unpaid wages having suffered unsafe working conditions.

Despite this, the opening ceremony will take place on Sunday with the United States Men’s National Soccer Team playing their first fixture against Wales on Monday.