NASA’s Orion spacecraft has captured a photo of it with the Earth and Moon in the background from its maximum distance away: 268,563 miles. Orion has now traveled farther away from Earth than any other spacecraft built for humans.

The uncrewed Orion spacecraft, part of the Artemis I mission, reached the farthest distance it will travel from Earth yesterday and captured multiple photos of the Earth and Moon together up to that point, including one that NASA describes showing the moon appearing to eclipse Earth. 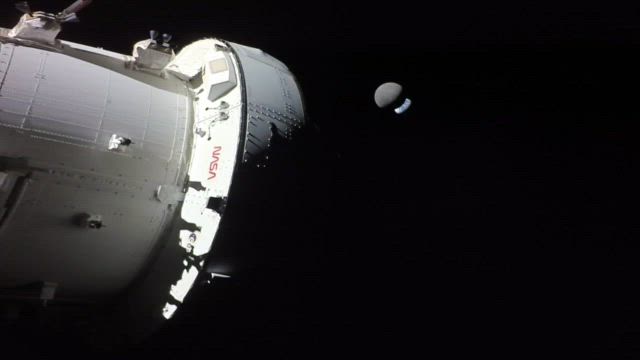 This huge distance is the halfway point of the mission and NASA reports that the spacecraft remains in “healthy condition” as it continues its trip in a distant retrograde orbit.

“Because of the unbelievable can-do spirit, Artemis I has had extraordinary success and has completed a series of history making events,” NASA Administrator Bill Nelson says. “It’s incredible just how smoothly this mission has gone, but this is a test. That’s what we do – we test it and we stress it.”

Orion is now headed back to Earth where it will splash down in the Pacific Ocean, which is currently planned to take place on December 11. It will reach a speed of 25,000 miles per hour (40,233 kilometers) and reach a temperature of 5,072 degrees Fahrenheit (2,800 Celsius), both faster and hotter than any capsule designed for humans before it. A team is set to deploy today to train at the expected splashdown location to make final preparations for recovery.

The mission can be followed in real-time from NASA’s Orion tracker as well as via live imagery that is being broadcast from the spacecraft.