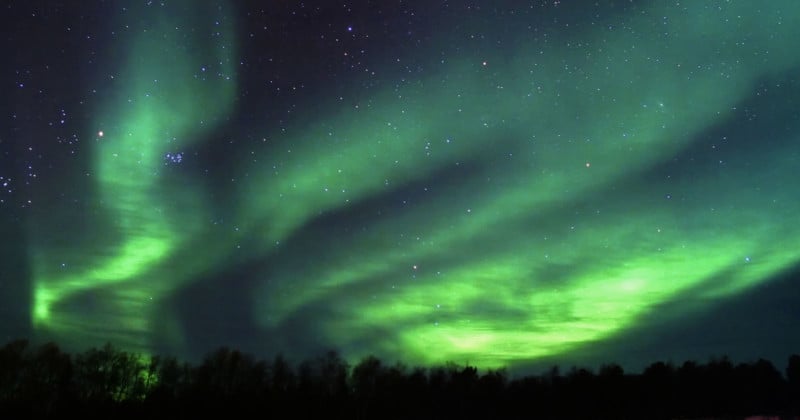 Photographing the northern lights is not easy but one lensman managed to do it while taking a nap.

Chris Lowther set out to capture star trails near his home in Yorkshire, U.K, on Monday night but wasn’t expecting much.

Lowther lives in a part of the British Isles that has low light pollution and is a popular spot for stargazers. Monday night was when Jupiter was the closest to Earth it has been for nearly 60 years.

“I knew about Jupiter, I got a couple of pictures of Jupiter but they weren’t very good.”

After setting up the camera with a timer, Lowther left his kit and put his head down for a few hours.

“I went to sleep, but then when I woke up about 02:00 and went outside and checked the camera, the images were bright pink and green,” he tells the BBC.

“I was about to pack in for the night but thought I’d just check before I switched the camera off and… wow!”

He not only captured millions of twinkling stars but also the green and pink glow of the elusive northern lights. Lowther says he then stayed up until 04:00 taking pictures of the aurora borealis.

Searching for the Northern Lights

The northern lights are not usually associated with England and are typically spotted much further north.

The magical dancing lights are caused by charged particles released from the Sun that strikes the Earth’s atmosphere. The magnetic poles then attract the particles and the collision causes beautiful green and sometimes pink or blue colors.

Jason Parnell-Brookes, author of PetaPixel’s guide to photographing the Northern Lights, says that getting a good shot is decidedly difficult.

“There’s a certain amount of luck involved as it’s incredibly difficult to pinpoint when and where the northern lights will display, but there’s also a lot of preparation you can do to ensure you maximize your chances of getting a photo,” he says.