Photographer Noritaka Minami spent over a decade documenting the iconic Nakagin Capsule Tower in Tokyo on large format cameras before it was demolished last month.

The Nakagin Capsule Tower, completed in 1972, was an extremely rare example of “plug-in” capsule architecture. The pods were designed to be replaced, and in the early 1970s Japanese media heralded it as “the dawn of the capsule age.” Vast floating cities made from the capsules were designed but the trend did not take off.

The well-known Nakagin Capsule Tower was just recently demolished and photographer Minami tells PetaPixel how photography is an important medium to remember the unique building by.

“From the very beginning, this project was based on documenting a space that faced the threat of demolition and using photography to respond to that potential disappearance,” says Minami.

“Now that the building has finally disappeared, I’m still absorbing the fact that these photographs depict a place I developed a deep connection with and is no longer possible to visit.”

The rooms inside the Nakagin Capsule Tower were tiny. Each capsule measures 2.5 meters (8.2 feet) by 4 meters (13.1 feet) with a 1.3 meter (4.3 feet) diameter window. This created a challenge for Minami who wanted to shoot the project with a 4×5 large format camera.

“Most of the interior photographs were taken with a Mamiya 7. Mamiya 7’s 43mm wide-angle lens was crucial for this project because of the limited space available within each capsule,” he explains.

“The camera’s portability also made it easier to position it inside the tight quarters of the capsules and staircases.”

Minami used Fujichrome Provia 100F and 400X for his project which is entitled 1972.

“I believe taking photographs with slide film was critical in capturing the distinct atmosphere of this architecture,” he adds.

The capsules were still used as private residences or office spaces right up until its demolition meaning that Minami had to gain permission from the space’s occupier.

“Creating this body of work was the product of repeated visits to the building over the course of 12 years and being patient in gaining access to capsules during each trip,” he says.

“This project would not have been possible without the support of friends I made at this building that helped me form connections with other residents to make the photography possible.” 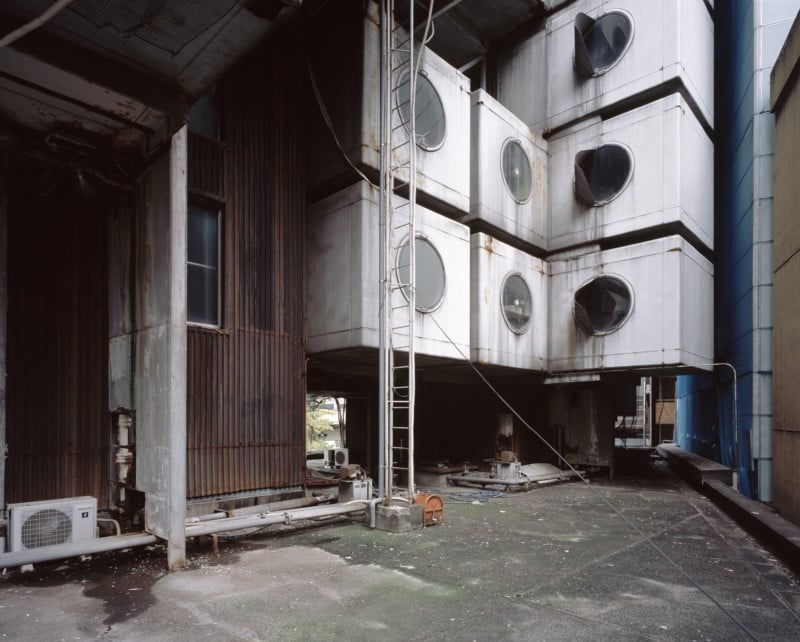 Minami describes his photography as “examining spaces that exist as anachronisms in the landscape that are overlooked for their significance.” The Chicago-based artist researched the history of the building extensively.

“It was the first structure in the world to incorporate replaceable capsule housing units that would facilitate the regeneration of the architecture over time,” he says.

Although the building was promoted in the media to symbolize “the dawn of the capsule age,” it became the last of its kind realized in Japan. Furthermore, the capsules were never replaced during the building’s existence, even though they were originally intended for a lifespan of 25 years.”

The Nakagin Capsule Tower was the realization of a radical architectural movement known as Metabolism. Influenced by the works of Karl Marx and biological processes, the Metabolism manifesto hailed a new form of living that included plans for a floating Ocean City that would be free of ties to a particular nation and therefore free from the threat of war.

“I wanted to investigate what became of a building that first opened as a prototype for a new mode of living and how this vision of the future appeared in retrospect,” says Minami.

Minami’s photos of the remarkable building are currently on exhibition at Mas Context in Chicago and is available to view until December 8.

More of Minami’s work can be found on his website.