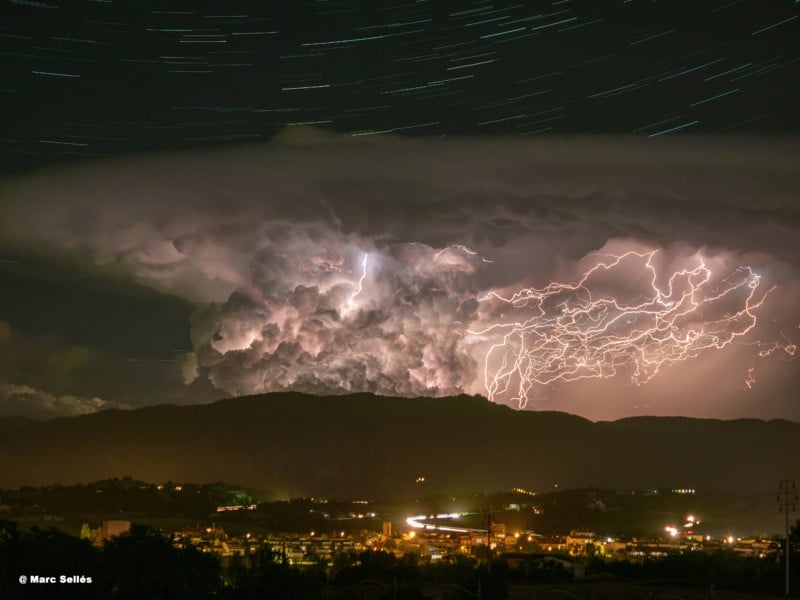 Amazingly, Limós tells PetaPixel that the lightning storm was taking place in a different country to the one he took the photo in.

“The photograph shows the village of Manlleu, Osona, near Barcelona, where I live. The storm was located in Carcassonne, France,” he explains.

The final image is a photo composite of 380 images, each with a one-second exposure.

“I configure my camera using an aperture of f/2.8, while the ISO was configured at 640,” says the Spaniard.

“The reason why I used one second of exposure is because if I had used a longer exposure perhaps the final image would have been overexposed. Moreover, if I had used more exposure, I would not have been able to capture all the bolts of lightning.”

Limós was also battling light pollution emanating from his hometown of Manlleu which he says is a problem when capturing nighttime photos.

“The one-second of exposure is perfect, in this way the light pollution does not interfere with the capture of the bolts of lightning. Light pollution is a problem to take night pictures,” he explains.

“I used Adobe Lightroom to crop all the images and to edit the final image. I also increased the lights of Manlleu in order to highlight the village. To obtain more detail of this zone, I decreased the light of the bolts of lightning.”

Limós, who used his Olympus EM1 Mark II and Olympus 40-150mm f/2.8 pro lens on top of a Benro tripod says that the stars appeared in trails as they circled the North Pole.

NASA selected the image for its astronomy picture of the day and said the “trailing effect is caused by the rotation of the Earth, and the curvature of the trails indicates their distance from the north spin pole of the Earth above.”

Limós says that despite the ferocious-looking lightning storm he could not hear it because it was so far away across the Pyrenees mountain range.

“This storm could be seen from the regions of Central Catalonia and those of the Northeast,” he adds.

More of Limós’ work can be found on his Instagram.