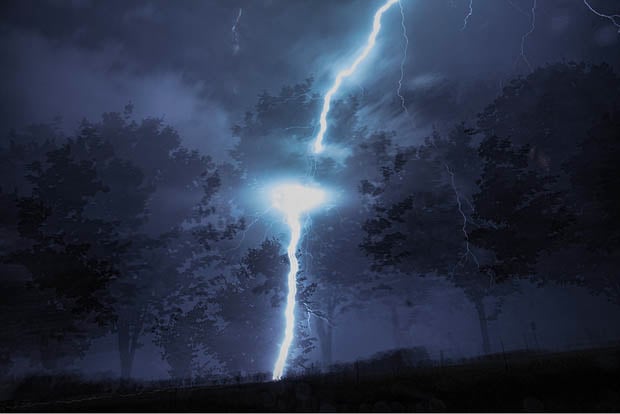 Photographing a lightning strike from close-up is a difficult and dangerous task, but Toronto-based wedding photographer and weather buff Richard Gottardo managed to capture something even crazier: a double-exposure photograph caused by the bolt of lightning itself.

He captured the ridiculous image above while pointing his Canon 5D Mark II out of his driver-side window and snapping 30-second exposures while speeding down a road at around 45 miles per hour. The lightning bolt (coupled with his motion) caused the double exposure by illuminating the scene twice: first when it struck the tree, and next when it shot from the tree to the ground. There are plenty of multi-exposure photos online that were created by doing this with strobes, but with lightning? That’s cray-zee.

Gottardo tells us the story behind the shot:

July 25, 2012 saw just about every storm chaser in Southern Ontario pulling an all nighter. A front moving across from Michigan was set to hit almost all of Southern Ontario with some severe weather. The storms this night did not disappoint; they came about 2 hours later than expected, but when they did they came with a vengeance! I had parked myself in an open field right in the path of where I expected the strongest storm to form, and it roared in with continuous lightning, pea sized hail and very heavy rain.

While I was sitting in the field taking pictures, I did not realize that the core of the storm was slowing moving right over me, and before I knew it, I was caught inside with torrential rain and pea sized hail — I could hardly see anything! To top it off, lightning was striking all around me very frequently, blinding me for a few seconds each time (it was close to 3am at this point).

Of course, I wanted a photo, so I set my tripod up on across my lap, pointed out the drivers side window, and started taking 30-second exposures while trying to drive out of the core. The lightning was so frequent that I got one just about every shot but this one hit very close, just on the other side of a narrow dirt road, hitting a tree, right in the center of the frame — it was definitely a one in a million shot!

Although Gottardo has long been interested in severe weather, only over this past year did he begin diving headfirst into more serious storm photography; he has accumulated roughly 500 pages worth of notes on forecasting severe weather. He says he’s currently trying to raise funds for a photo expedition to Tornado Alley.

You can find more of his storm photography on his website here.

Image credits: Photographs by Richard Gottardo and used with permission

Canon 5D Mark II Goes Under the Knife, Emerges as a Wannabe Leica