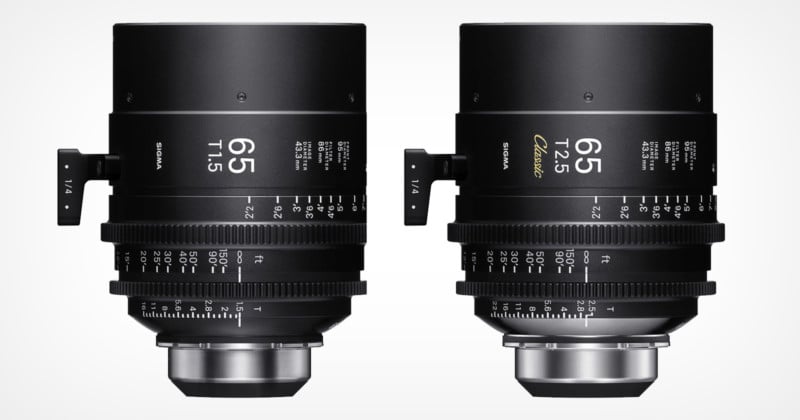 Sigma has announced that it is developing a pair of cinema prime lenses: a 65mm T1.5 FF Cine Prime and 65mm T2.5 FF Classic Prime. The addition of these two lenses brings its line of full-frame compatible prime cinema lenses to 11.

The two lenses bear the same focal length, but have some distinct differences.

The 65mm T1.5 FF is a full-frame high-speed prime lens that Sigma is making available for the PL mount, Canon EF mount, and Sony E mount. Sigma says it incorporates an optical system that is specifically designed for cinema lenses and will meet “the stringent demands of this audience.” Sigma also says that it is one of the few options that is compatible with the latest digital cinema cameras with large image sensors.

It features an aperture range of T1.5 through T16, has a magnification ratio of 1:7.9, features a nine-bladed aperture diaphragm, and has a close focusing distance of two feet, two inches.

In contrast, the Classic Prime 65mm T2.5 FF leverages the optical system that was made for the 65mm T1.5 FF but uses uncoated lenses. Sigma says this configuration makes it possible to achieve both high resolutions as well as classic image expression with low contrast and “beautiful flaring and ghosting effects.”

The lens has a different aperture range as a result, T2.5 through T25, but has shares the same other major features except for the mount availability: the Classic Prime 65mm T2.5 FF is only available in PL mount.

It should be noted that the aperture size would be physically the same, but because T-stops measure light transmittance not physical aperture. If these lenses were measured in F-stops, they would be the same. As such, they have the same bokeh characteristics.

Both new lenses are on display at Sigma’s booth at IBC in Amsterdam this week, although when users can actually purchase the lens is more ambiguous. Sigma says that it will provide pricing and availability for these two lenses at a future date.

In addition to these new lenses, Sigma is also changing how it is offering the lenses in its cinema line for purchase. Previously, the FF Cine Classic Prime lenses were offered exclusively as a ten-lens bundled kit, but starting today the company intends to make the lenses available to purchase individually. The pricing for these lenses will be revealed at a later date.

Update 9/8: Added some additional context regarding light transmission as explained by Sigma.