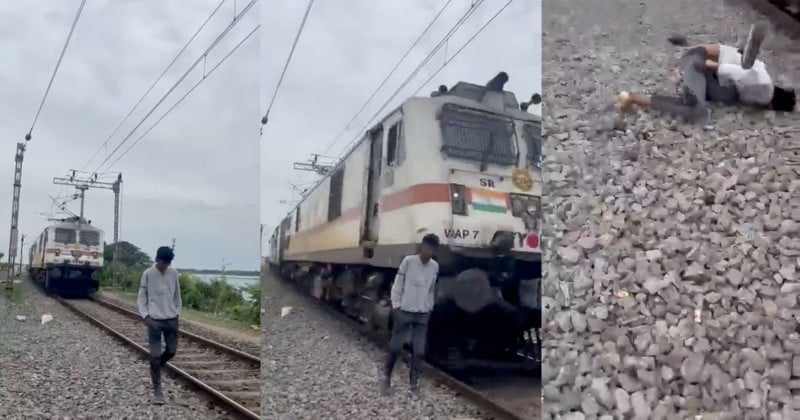 An Indian teenager shooting an Instagram Reel was hit by a train. The horrifying incident was caught on camera, and although the boy received series injuries, he miraculously survived the accident.


The footage shows the teenager walking perilously close to the line as a train was approaching behind him. Not watching the approaching train, the teen unwittingly positions himself directly in the train’s path and is forcefully struck on his side as the locomotive rumbles past, sending the boy flying through the air and impacting the ground.

17-year-old youth suffered serious inquires after he was hit by running train. Incident took place as the teenager was shooting for a video beside the railway tracks at the #Kazipet railway station #Telangana.#ViralVideo pic.twitter.com/iqxjsIe3zc

The boy’s panicked friends who were filming rush over to him to check on his condition but the teenager appears out of it.

The video was filmed in Kazipet, Telangana, in Central India on Sunday, September 4th, and the young man has been identified as Ch Aksha Raj.

Local reports says that the teenager was filming for an Instagram Reels video.

Raj was rushed to a government hospital by railway police before being transferred to a private hospital by relatives.

His injuries are described as “non-life-threatening” but he has reportedly suffered a fracture to his leg as well as injuries to his face.

Railway workers, who had been carrying out repairs to the line at the time, had apparently tried to warn the teenager not to walk so close to the line.

Unfortunately, this is not the first time someone has suffered injury or worse while trying to obtain online clout.

In July, PetaPixel reported on an American tourist who fell into Mount Vesuvius, in Italy after he had climbed down into the crater to retrieve his mobile phone which he had dropped because he was attempting to take a selfie at the top.

The 23-year-old tourist suffered nasty injuries, including grazes to his back and legs. He had to be rescued by a dispatch helicopter.

In 2015, A 19-year-old man accidentally shot himself while posing with a gun for a selfie.

He was trying to take a photo for Instagram that showed himself holding a gun up to his head. The gun discharged and struck him in the throat.