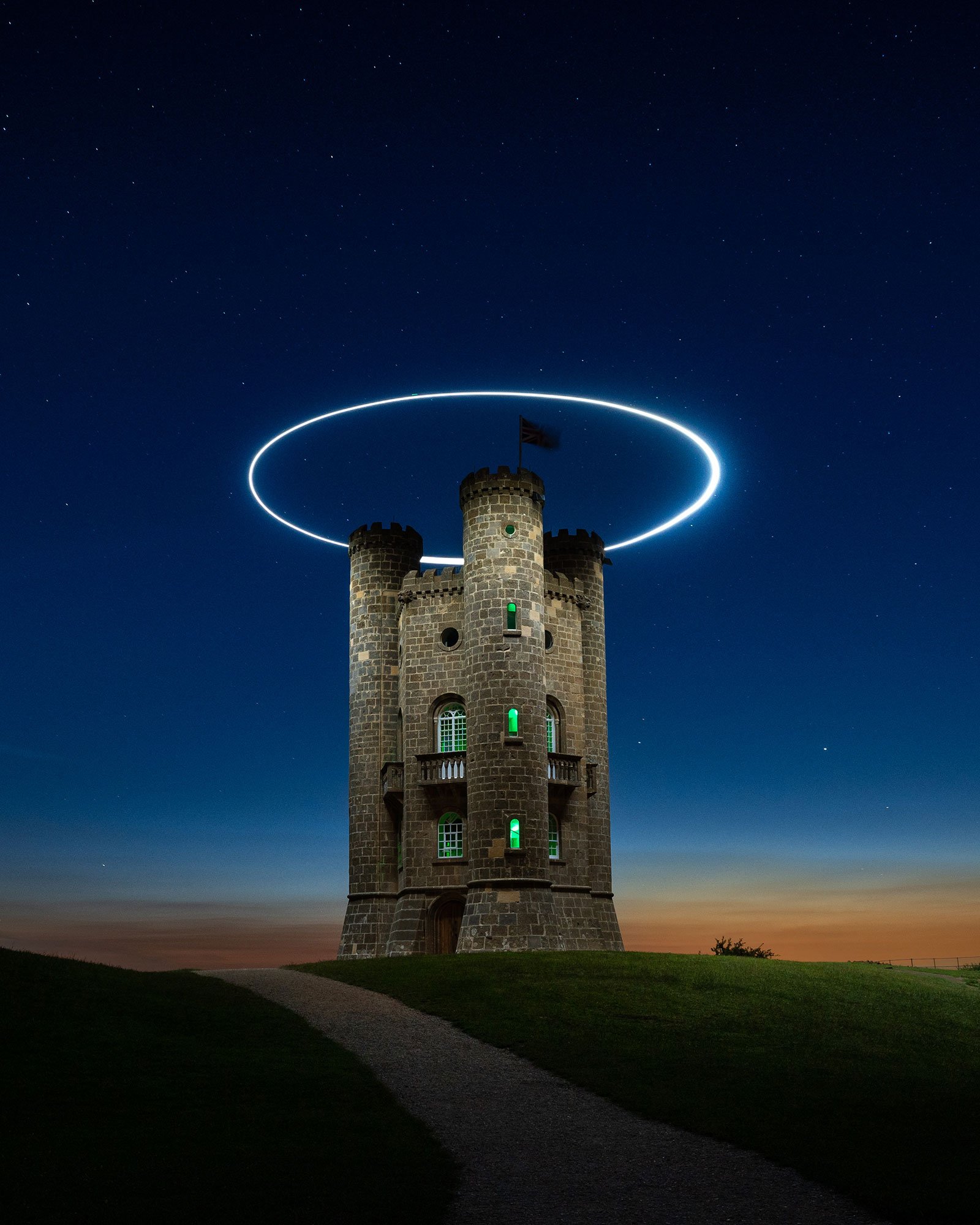 Since his youth, photographing long-exposure light painting images has remained an ever-fixed infatuation of artist Will Ferguson.

Fergusons’ initial exploration of the technique began with classic shots of cars driving along motorways, but soon progressed to drone footage which eventually led to his current creative vision: the usage of drones and LED lights in night photography.

“I […] have a passion for flying drones and I shoot a lot of commercial drone operations for clients. When I heard that an LED lighting company had created a kit to safely attach small but bright LED lights to my drone, I was sold. Combining these two passions energized my imagination,” Ferguson says, speaking with PetaPixel.

Ferguson, who is also a filmmaker, recently took his Sony Alpha 7R III, DJI Mavic 2 Pro drone, and creative vision to Broadway Tower in the Cotswold region of southwest England.

Creating a kind of celestial halo and light spiral using the DJI Mavic 2 Pro, Ferguson shot images and filmed a striking behind-the-scenes TikTok that has now amassed over 300,000 views.

What is particularly striking about Ferguson’s night photography is the electric vibe that seemingly pulsates from his images. The glow and neon tone of the blue LED vividly highlights the texture of the tower, highlighting the structure in this way also allows Ferguson to capture other aspects of night photography that he finds alluring.

“I love how night photography uses the solitude and drama of the darkness to create images which are amplified through long exposure,” Ferguson tells PetaPixel.

Despite the sleek appearance of Ferguson’s final products, the shoot itself still had its challenges. 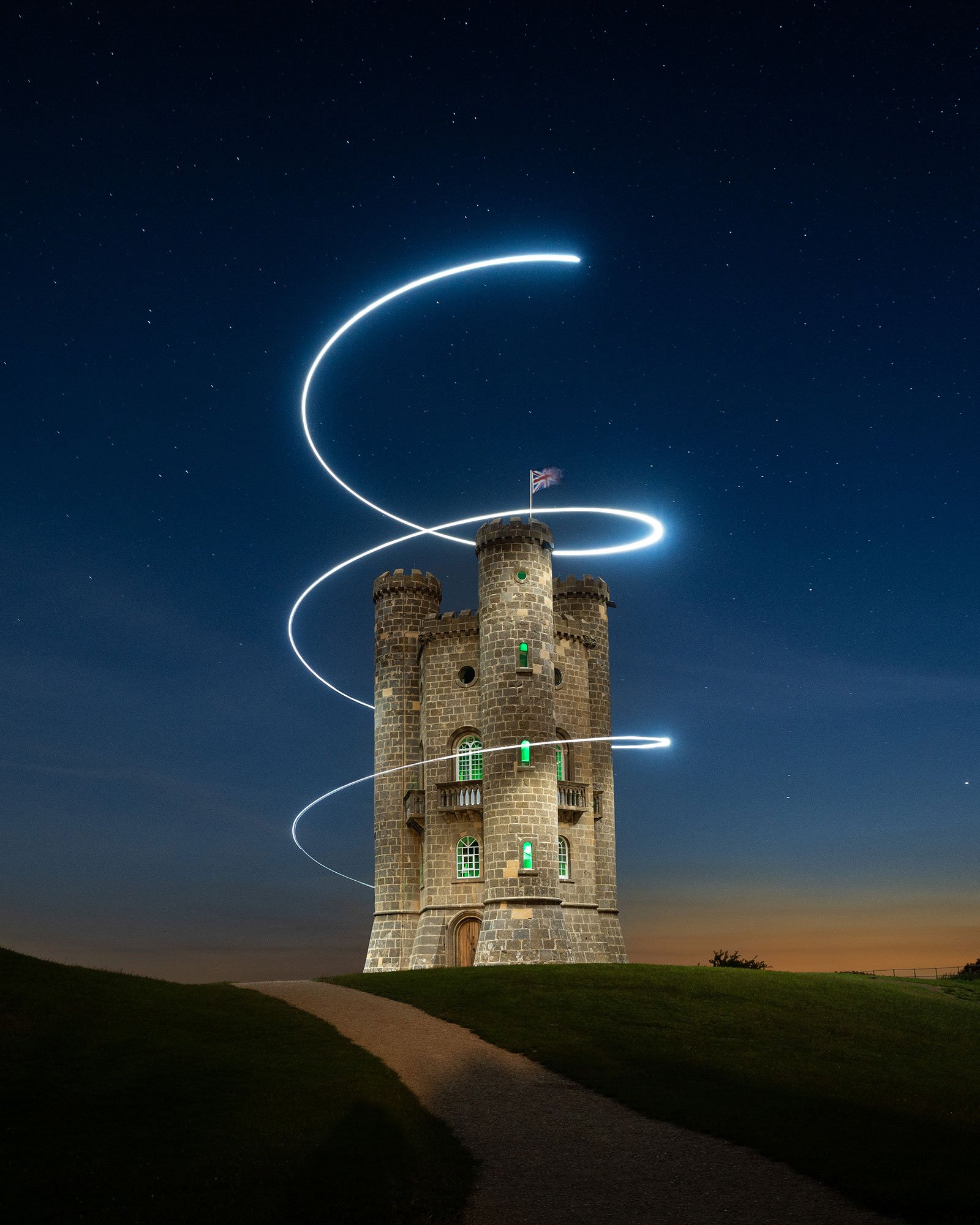 “The most difficult factor of taking this photo was it was quite a gusty night. I went to this location to create a drone halo but realized quickly that getting the perfect circle in these conditions was going to be extremely tricky and not give me the result I was looking for,” Ferguson says.

Furguson was able to conceal the imperfections that were caused by the wind by flying the drone in a spiral pattern around the tower.

“To the human eye, it was harder to see any little wobbles the drone had from the wind…” Ferguson adds. “I use Adobe Lightroom and Photoshop for image processing. However, for this image, I only used Lightroom to adjust the colors and make Broadway Tower and the drone halo pop.”

Ferguson is also keen on preparation and performs daytime preflight checks to prepare for any potential issues or obstructions such as electrical pylon wires or tree branches, that may disrupt his shoots. He also remarks that caution is key when he does his nighttime projects.

“The most important aspect of taking these images at night is safety…Drones do get a lot of bad press due to some irresponsible people flying them and I hope this image inspires others to go out and fly their drones. Just do it safely, using common sense and within the aerospace laws of your country.”

Ferguson was fortunate that in this shoot other drones and bystanders had dispersed around sunset and he was able to have access to the space uninterrupted.

The results have been a hit on TikTok and have sent numerous positive responses and feedback Ferguson’s way.

“The response to this image has been crazy […] and I am absolutely buzzing! […] One of the best feelings is having a community of people following my social pages because they love my work and are inspired to go out and take their own images.” 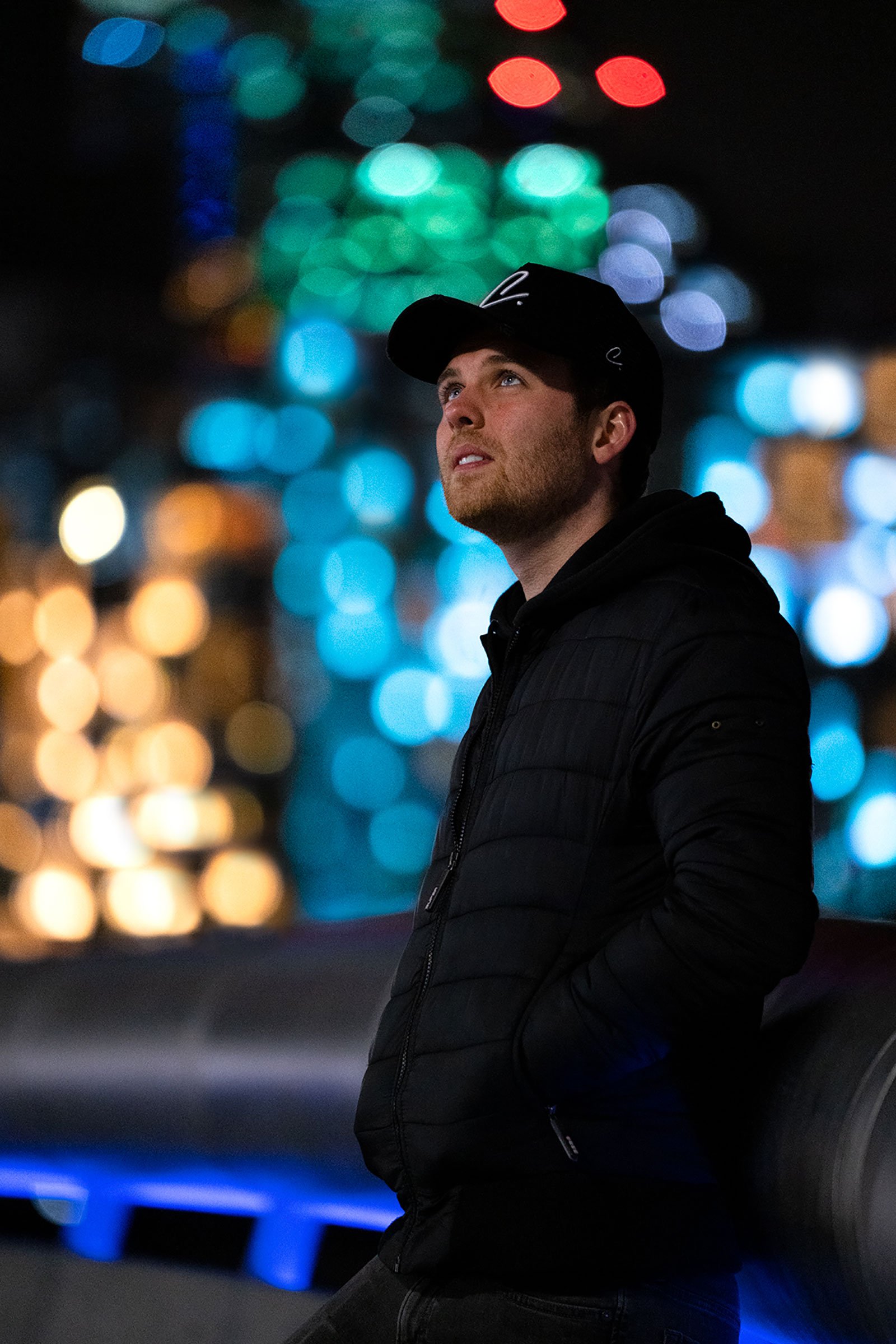 Several brands have reached out to Ferguson in hopes to collaborate on future projects, as well as other artists inquiring about general techniques in drone usage and photography.

“I also get hundreds of messages a day from people asking photography and drone-related questions. It is really rewarding to be able to help other photographers improve their images. My answer is always the same. Shoot passion projects. Shoot as much content as you can and shoot images that you can’t get enough of,” he says.

“I’ve gone out and taken a photo of something just because I love to do it. Put that image out there for the world to see and it just so happens that hundreds of thousands of people around the world also love it and now I have brands knocking at my door wanting to work with me on paid projects. You create your own luck.”