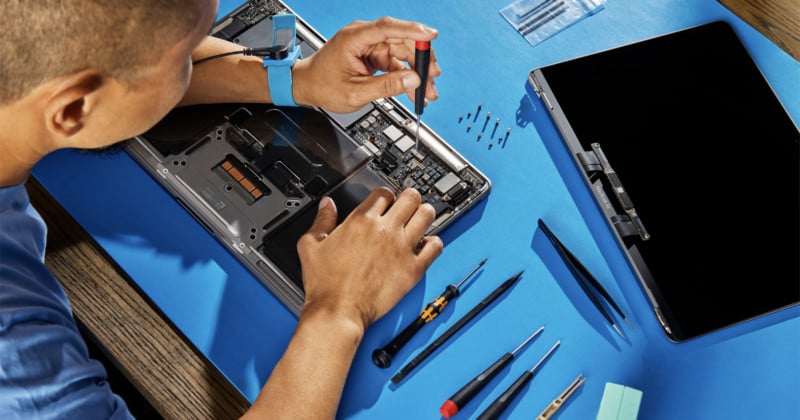 Apple will add the MacBook Air and MacBook Pro laptop models that are equipped with the M1 family of chips to its Self Service Repair program tomorrow. This includes the parts, tools, and manuals that are required to make repairs to these devices at home.

Apple’s Self Service Repair launched earlier this year with support for the iPhone along with the promise that it would expand to other devices in the future. Apple is making good on that promise and in addition to adding support for the two laptop models, it will expand the program to additional countries (starting with Europe) as well as add more Mac models later this year.

The repair options for the MacBook Air and MacBook Pro include “more than a dozen” different repair types for each including the display, top case with battery, and the trackpad. Apple says that it intends to expand this in the future.

“Customers who are experienced with the complexities of repairing electronic devices will be able to complete repairs on these Mac notebooks, with access to many of the same parts and tools available to Apple Store locations and Apple Authorized Service Provider,” the company says.

That language is somewhat telling, considering the complex nature of the repair process for iPhones. Multiple experts have attempted to use Apple’s Self Repair Service on iPhones since it launched and a majority — if not all of them — found the program to be not only complex but also expensive.

Those who decide to repair their own iPhones can expect to be shipped upwards of 75 pounds of equipment and even though Apple provides instructions, the process of repairing a device was found to be daunting even for someone with experience repairing Apple products.

Even if it’s not for everyone, Apple is at least appearing to hold up its end of the bargain when it comes to demands from Right to Repair supporters and the company says that the Self Service Repair program is part of its efforts to further expand access to repairs. Rental kits are made available for $49 for a one-week rental and are shipped free of charge so that those who do not want to purchase tools for a single repair still have access to the same tools.

The MacBook Air and MacBook Pro repair kits will be available starting August 23.