On the ground in what has become a very active volcanic area, photographer Chris Burkard explains what it was like photographing for National Geographic as Iceland experienced its second volcanic eruption in as many years.

On August 3, a second massive outburst of lava emerged in Iceland near the area that saw huge activity last year. This time, however, the eruption is significantly more powerful. In a detailed story on the eruption, National Geographic says this strongly suggests that the country’s Reykjanes Peninsula will become one of the most volcanically dynamic parts of the planet for several generations.

That story includes several incredible photos captured by travel and adventure photographer Chris Burkard. Speaking to PetaPixel, Burkard explains what it was like to be on the ground amongst the impressive geological event.

“Shooting this eruption is unlike anything else I have ever shot, mostly because of how rare and fleeting it is. Shooting an active volcano is a once-in-a-lifetime opportunity and knowing that it could end at any moment really changes the way things feel,” he says. 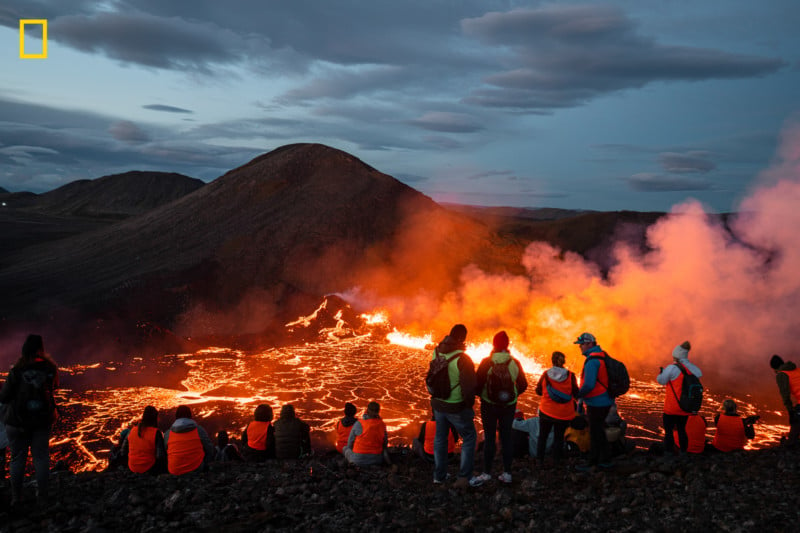 “It has made me feel like I’m documenting a historical event, compared to many of my other shoots which are shooting surf or outdoor activities or commercial projects. I think this makes the images feel a lot more significant to me. Of course, there are challenges, from lots of unknowns like when it will end and where you can be, and how close you can get to the heat, but every shoot brings its own challenges. To me, what makes this stick out is its historical feel.”

When the eruption started, Burkard happened to be in the right place at the right time.

“Somehow I have just happened to be in Iceland for the eruptions that occurred both this year and last year. I travel to Iceland as much as I can and spend a lot of time in the country. I usually come over here for photo projects and leave some time in between them or after them to just enjoy being here,” he says.

“It worked out perfectly and I was here with all of my camera gear and an open schedule when the Meradalir eruption started. It feels like a gift for the timing to work out this way and I wasted no time in trying to be shooting it as quickly as possible. My vision for capturing the images mostly revolves around just trying to document the event as it unfolds as it is ever-changing and unpredictable, which makes it all the more fun.” 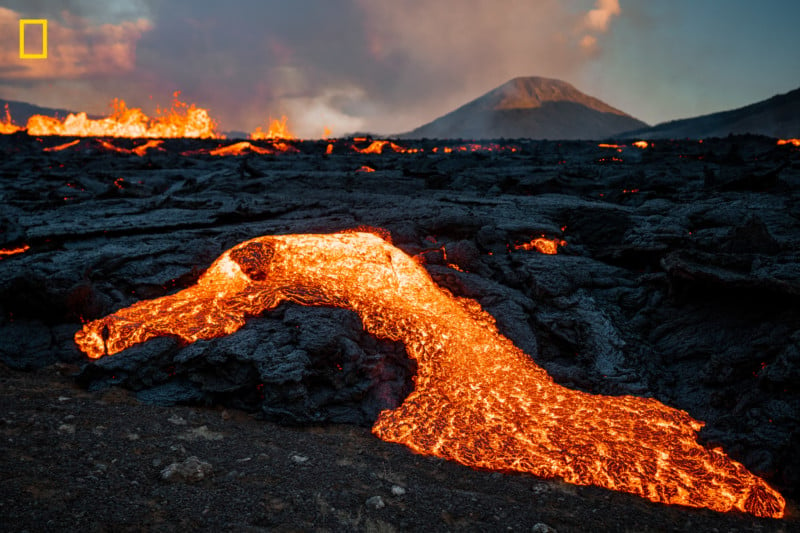 All of Burkard’s photos of the event were captured on a Sony Alpha 1 with either a 16-35mm or 24-70mm lens. His aerial photos were captured with a DJI Mavic 3.

“I actually didn’t have my usual full kit of gear with me when the eruption started but I had enough to make it work and wasted no time worrying about what I had and didn’t have. Shooting on the ground with my camera is a great way to shoot the up close details of the volcano and the lava, as well as to document the more intimate experience of humans interacting with nature and the eruption,” He says.

“Shooting with the drone is a great way to show the whole picture — to show what the phenomenon looks like from afar and how big it really is. It also unlocks a whole new perspective, being able to shoot from the sky and a variety of angles that you can’t shoot on the ground with a camera, such as looking straight down on the volcano from above. Shooting with a drone has been really key for showing the whole scene and documenting the area. I think the pairing of both is the ultimate combination as you can paint the entire picture of both the natural event as well as humans experiencing it.”

As is the case with most shoots, photographing the eruption came with its own unique set of challenges. Burkard says that in this case, understanding what was safe and what wasn’t was the biggest challenge, specifically when it came to where he could stand. 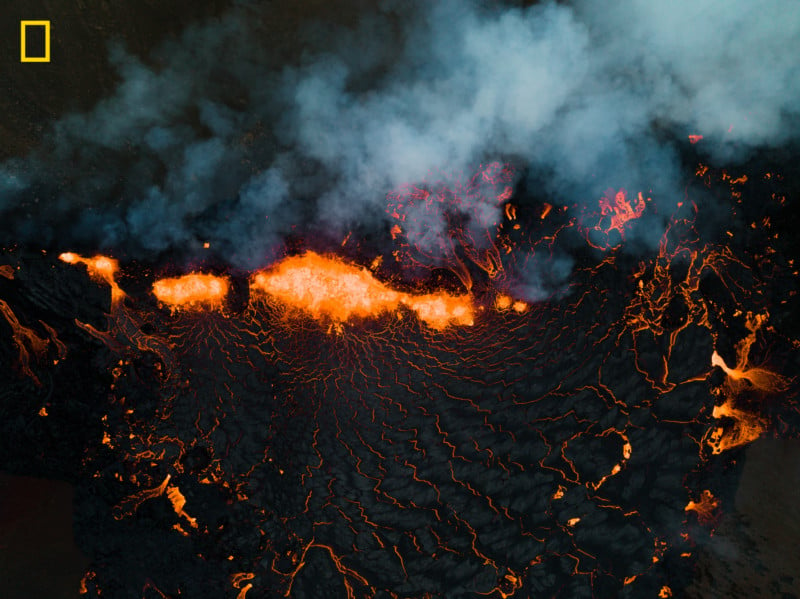 “There are places that are safe to stand and shoot from and places that are not, there are times when it is safe to go close and when it isn’t, the air quality changes and can be hazardous, so just navigating the safety protocols is key,” he explains.

“I would say it has been easier to capture this in a way that fits my vision than other works I’ve done. I say this because for many shoots I do there is all sorts of planning and producing and it takes a long time to get things the way I want them. With the eruption, you just have to shoot. There isn’t much time to worry about this or that and there is certainly no planning on producing, it is just embracing my creativity and the impressive display of nature. It is difficult but it is also really fun to just get into a flow state and document everything going on without time to waste worrying about this or that.”

Burkard says that the chance to shoot for National Geographic is an opportunity that he, and probably most outdoor and adventure photographers, dream about. 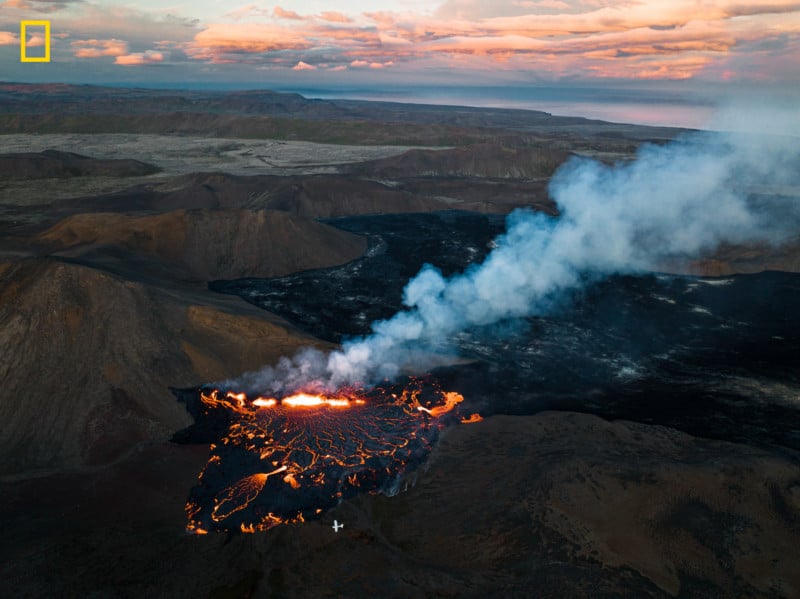 “It’s one of the most prestigious magazines in the world and getting to shoot for National Geographic is an honor. Knowing my work meets their high standards and will be widely circulated to people around the world makes me feel quite grateful. My ultimate goal in my career is to help people appreciate our planet and the outdoors and I think National Geographic does that on a huge scale,” he says.

For more on this story, including additional photos from Burkard, make sure to visit National Geographic’s website.