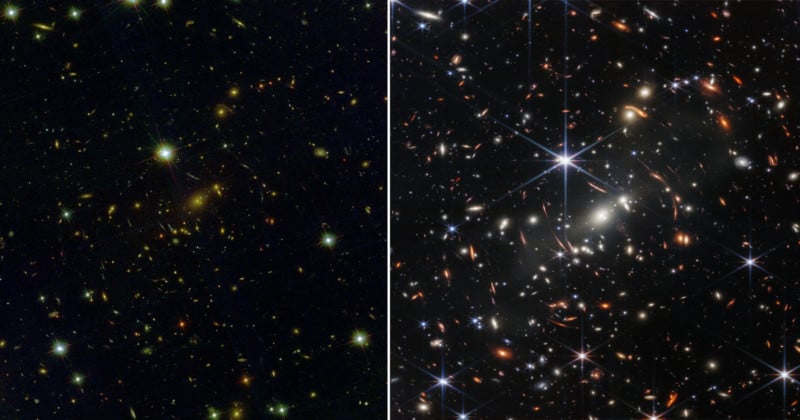 The James Webb Space Telescope’s first full-color photo has been revealed, and comparing it side-by-side to the same area that was imaged by Hubble shows just how much more detail Webb’s camera is capable of capturing.

Webb’s first photo was unveiled during a press conference with NASA and United States President Joe Biden earlier today. The photo is of a galaxy field called SMACS 0723, which is located 4.6 billion light-years away. But thanks to gravitational lensing, which is the cause of the distortion seen in the image, Webb is actually able to look much farther away. NASA says that the light that Webb senses is more than 13 billion years old, which means these galaxies were formed just a few hundred million years after the Big Bang.

“Webb’s NIRCam has brought those distant galaxies into sharp focus — they have tiny, faint structures that have never been seen before, including star clusters and diffuse features,” NASA says. “Researchers will soon begin to learn more about the galaxies’ masses, ages, histories, and compositions, as Webb seeks the earliest galaxies in the universe.”

This is not the first time astronomers have imaged this area of the sky. Hubble also imaged SMACS 0723, as seen below:

Redditor Whatevery1sThinking shared a gif that overlaps the two images to give some perspective of just how much better James Webb’s imaging capability is:

The detail and resolution of Webb’s image is vastly superior to Hubble’s, and the result is the deepest and sharpest infrared image of the distant universe that has been captured to date.

“Thousands of galaxies — including the faintest objects ever observed in the infrared — have appeared in Webb’s view for the first time. This slice of the vast universe covers a patch of sky approximately the size of a grain of sand held at arm’s length by someone on the ground,” NASA says.

“This deep field, taken by Webb’s Near-Infrared Camera (NIRCam), is a composite made from images at different wavelengths, totaling 12.5 hours — achieving depths at infrared wavelengths beyond the Hubble Space Telescope’s deepest fields, which took weeks.”

This photo is just one of five total that will be revealed this week. It and the others (the names of the targets were revealed last week) will be unveiled on Tuesday, July 12 at 10:30 AM EDT during a live NASA broadcast.