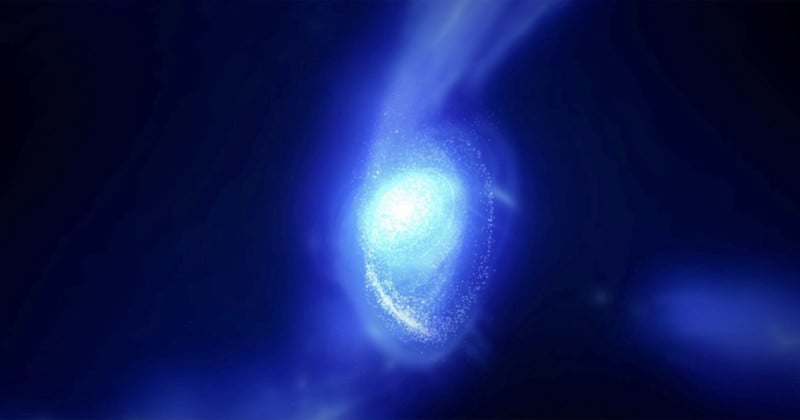 An international research team has observed signs of rotation in a galaxy that existed only 500 million years after the Big Bang, easily the earliest galaxy ever observed that shows a signature of rotation.

Using the Atacama Large Millimeter/submillimeter Array (ALMA) located in the Atacama Desert in Chile, a team led by Tsuyoshi Tokuoka, a graduate student at Waseda University in Japan, successfully measured small differences in the “redshift” from position to position inside the galaxy, which is called JD1.

“Beyond finding high-redshift, namely very distant, galaxies, studying their internal motion of gas and stars provides motivation for understanding the process of galaxy formation in the earliest possible universe,” explains Professor Richard S. Ellis from the University College, Londo, a member of the research team.

Galaxy formation begins with the accumulation of gas and proceeds with forming stars from that gas. Over time, star formation progresses from the center outward, a galactic disk develops, and the galaxy acquires a particular shape, the researchers explain.

As this process continues, new stars form in the expanding outward rotating disk while the older stars remain in the central core. The researchers say that it is possible to determine the evolutionary stage of a galaxy by studying the age of the stellar objects and the motion of the stars and gas. 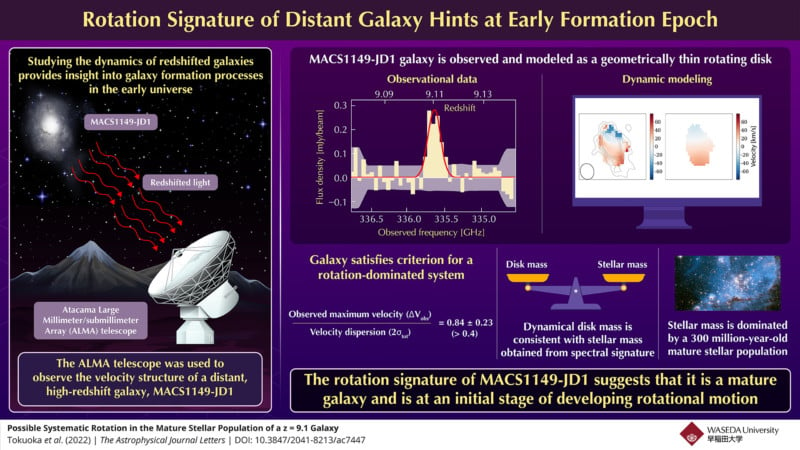 “The rotational speed of JD1 is much slower than those found in galaxies in later epochs and the Milky Way, and JD1 is likely at an initial stage of developing a rotational motion,” said Akio Inoue, a professor at Waseda University.

JD1 is by far the most distant galaxy ever observed that has a rotating disk and the team says it is significant because together with other measurements of nearer systems that have been accumulated, they are able to delineate the gradual development of rotating galaxies over more than 95% of cosmic history.

The team plans to identify the locations of young and older stars in the JD1 galaxy to refine their scenario for its formation using the James Webb Space Telescope as soon as they can.

The team has published their results in a full research paper available in The Astrophysical Journal Letters.

Header Image: Conceptual image of MACS1149-JD1 forming and spinning up to speed in the early universe. Credit: ALMA (ESO/NAOJ/NRAO)