Dutch startup Ventje offers small yet versatile camper vans that appear to be a more affordable way for photographers who want to live in a nomadic style to get everything they need in one compact package without breaking the bank.

Ventje is a van conversion concept that combines the popular popup Volkswagon T5 style camper van with custom-fit lounging, kitchen, and bathroom facilities that manage to squeeze into a compact and portable area. Coupled with the multiple power options for keeping campers connected and charged, the Ventje becomes functional as an on-location resource, as well as a home away from home.

The camper has a built-in 95Ah battery that can provide up to four days of electrical power between charges, which can be performed by the car’s gas engine, plugged into an AC socket, or with the 180w solar panel built on the camper’s rooftop. With four USB charging points, a 12V socket, and three 230V European sockets, any photographer or content creator out in the field has plenty of access to the power needed to charge camera batteries, power lights, and connect laptops to keep them up and running while doing post-production.

Able to sleep four, the Ventje camper van’s furnishings can also be reconfigured for comfortable outdoor lounging. It is also fully insulated and has a diesel heater that keeps the interior warm when out in colder locations. The popup top also provides enough room for an adult to fully stand up and has an additional sleeping space.

The kitchen features a 26-liter electric fridge, a reservoir to hold 10 liters of fresh water, and two propane gas burners which can be accessed from either inside the van or outdoors after lowering the rear tailgate.

The Ventje includes the basic necessities and more to make an off-the-grid lifestyle functional without being over-the-top like other companies in the space that charge hundreds of thousands of dollars.

The retail price of a fully-equipped Ventje van starts at around $52,000 which includes all taxes, the initial cost of the T5 van, and the custom camper conversion interior buildout. A larger, T6.1 version starts at around $74,000. Delivery after order is currently taking between six and 12 months, and there are also plans for an all-electric eVentje model, presumably based on Volkwagon’s upcoming BuzzID model, which is coming in 2024.

As a custom van conversion concept, it’s likely that a content creator could desire to eschew the comforts of sleeping overnight in favor of bringing more gear on location. As such, the buyer can decide on what elements they want to include in the interior build-out. 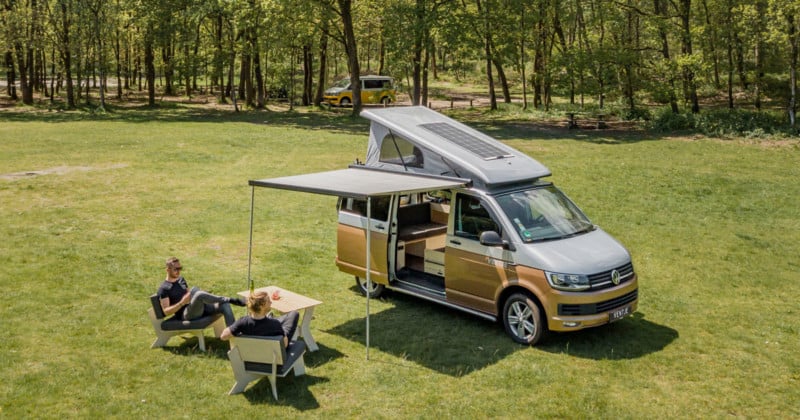 Ventje camper vans are available to buy or rent in the Netherlands, Belgium, and Germany and the company plans to expand to the United Kingdom, Italy, and France. Unfortunately, there is no word on when Ventje plans to come to North America. Orders can be made on the Ventje website.