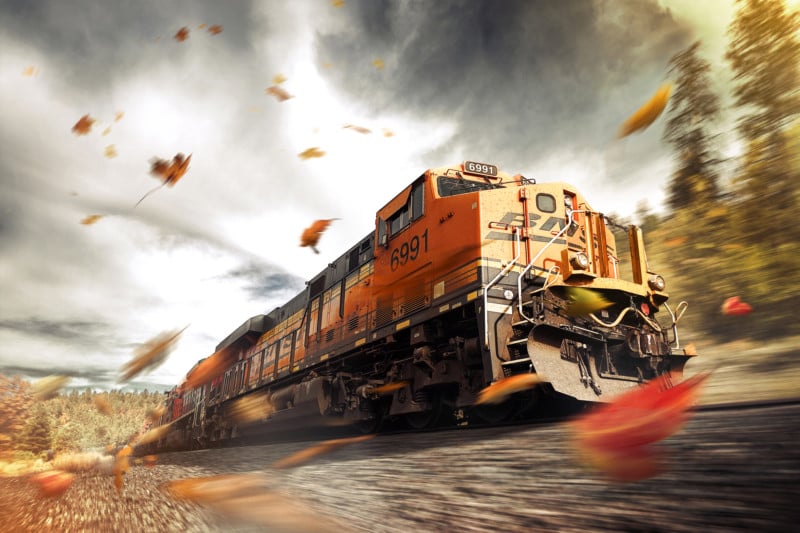 The tracks begin to ring. I listen closely with the engine roaring louder and louder as each second passes and ready my camera… my finger resting steady on the shutter.

The forest; the leaves; the freight train tearing by and then slowly fading; everything falling quiet again — it all makes me think of Riley. After his passing, my therapy was walking along these tracks, camera in hand. Many times I would never even take a shot, instead preferring to immerse myself in the stillness and color around me.

Riley was my best friend. He was a German Shepherd shelter pup I’d quickly fallen in love with and also my longtime companion for exploring and taking photos. As his body aged and his joints ached, Riley was never able to join me on my longer walks to the tracks. Ever since he was diagnosed with lymphoma in early 2020, he became increasingly frail and I knew our special moments were all on borrowed time. I cherished every second of our adventures together, whether outside or in. 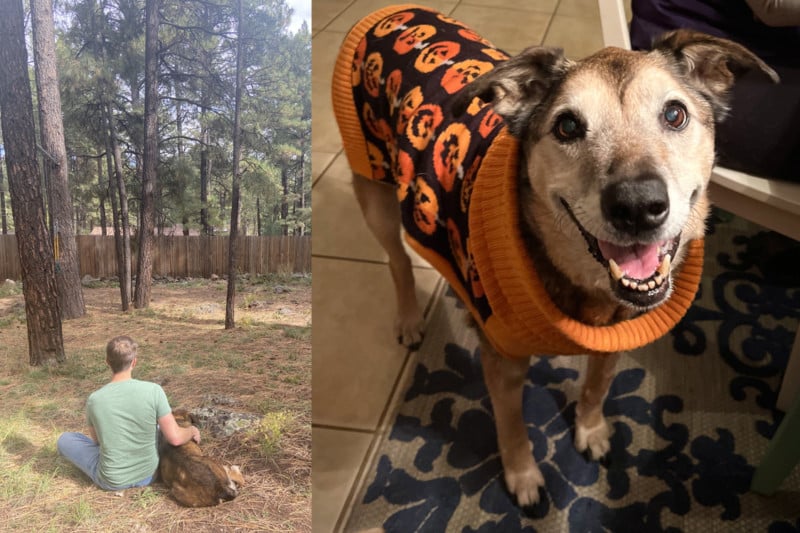 We gave him all the love we could spoil him with during those last months, and he never stopped smiling even through the pain. When we were told he had 3-6 months to live, Riley surpassed all expectations and gave us over a year to continue enjoying his presence. Because it was during the pandemic, we spent our days playing in the yard, soaking up family time, feasting and feeding him all the leftovers he wanted. We were grateful for every moment we got with Riley, never taking for granted the unconditional love he gave us since we brought him home.

It’s October now, and the world burns red and orange around me. This time in Riley’s absence, I’ve brought along the leaves he used to lay on in our backyard.

There’s an image I want to cultivate; something with the idea of drawing him back to the places he never was but where I feel his presence the most. When I could no longer bring him on the walks we’d take while the leaves were turning and the air grew colder, I at least had a piece of him that I could remember. It was a small semblance of him that I wanted to capture through photos, a way for me to see him even when memories fade.

Now the ringing gets louder.

I feel the shutter close.

I’d only gotten this camera the day after Riley passed; a Canon EOS R3 I’d had my eye on since I had first heard about it. I knew that the initial prototypes were going to the Olympics – as well they should. The R3 is primarily a photojournalist camera, and I felt it best be in their hands first, as they deserve the opportunity to provide feedback before a commercial photographer like myself does.

Nevertheless, it was a possession I had waited patiently to inherit.

When the day arrived, it was actually much sooner than I’d anticipated. 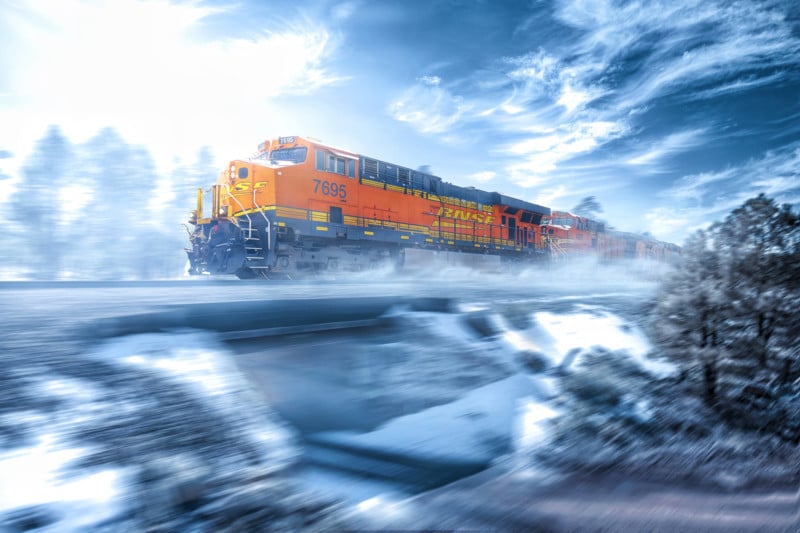 That date happened to be October 19, 2021 — the day after Riley’s passing. While I was driving home from saying goodbye, unbeknownst to Canon, I received a text message that they had sent me the first production body. It was a gift I couldn’t have predicted but was humbled and thrilled to receive. A gift that led to my healing through art and a reignited passion, and a piece of Riley that I could carry with me in a new light.

The Canon EOS R3 became a kind of extension of me, albeit with some getting used to. It’s a lower resolution camera than I would usually shoot, but it’s also the single best-balanced chassis I’ve ever held. The ergonomics are certainly more conducive for creating than anything else I have ever had the good fortune to use. And the more I practice the more my fingers dance to the choreography of the camera without it ever leaving my eye. 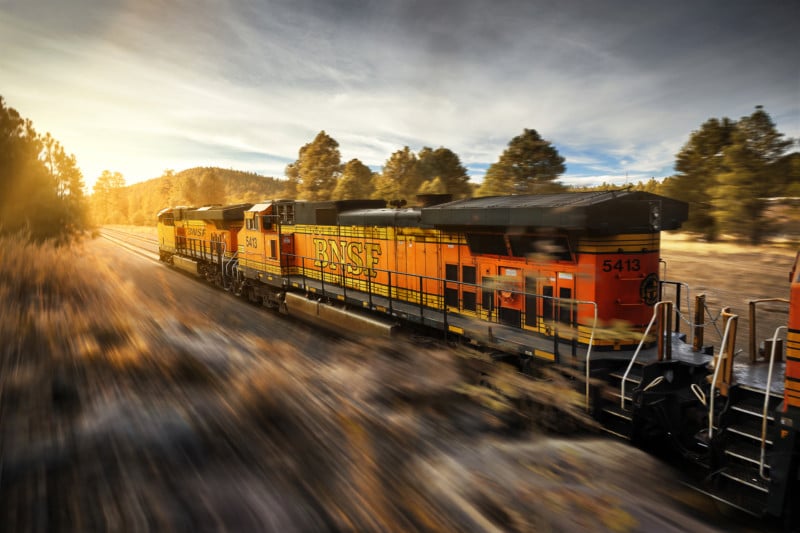 For these photos in particular, I kept the aperture constant based on the information in frame that I want in focus, with the shutter speed fluctuating based on the speed of the train. By now I’ve learned to predict the latter almost entirely by sound; a locomotive off in the distance is essentially music to my ears. With the two main elements of the exposure in place, I dial further compensation through the ISO on a control ring I designate to the front of my lenses.

With the way that the R3 allows me to express my vision so swiftly, I have also started dialing in white balance on the fly, shooting the same train through different Kelvin values as it passes by. I’ve found that the R3 sensor craves warm color temperatures away from the light source and cooler ones when angled towards it.

The viewfinder on the R3 is also a particularly captivating element. It happens to be the first mirrorless viewfinder where I can comfortably and quickly set a circular polarizer. To do this, I set the M-fn button behind the shutter to zoom. When I determine the angle that the shot will be at, I compose the frame with the zoom set and turn the filter based off of the reflection of the center part of the railroad tracks.

The images that the Canon EOS R3 allowed me to create were the ideal commemoration I’d envisioned for Riley. Not only did the photos capture the color and effects I desired, but they also captured a piece of Riley that I can carry with me whether he is with me or not.

In a way, he never left. I hear him in the engine of the train growing louder and then again in the calmness as it trails off in the distance; I see him in the leaves falling and coming to life again in my backyard; I feel him beside me on walks with my camera in hand, as close and as comfortable as my fingers guiding a lens and clicking the shutter button. In these photos, too, I feel that I’ve captured the joy he felt in leaves falling and long walks outside, just him and I.

In tiny miracles like the surprise I received the day after he passed, I feel a presence telling me to keep going and to keep pressing toward all that is to come.