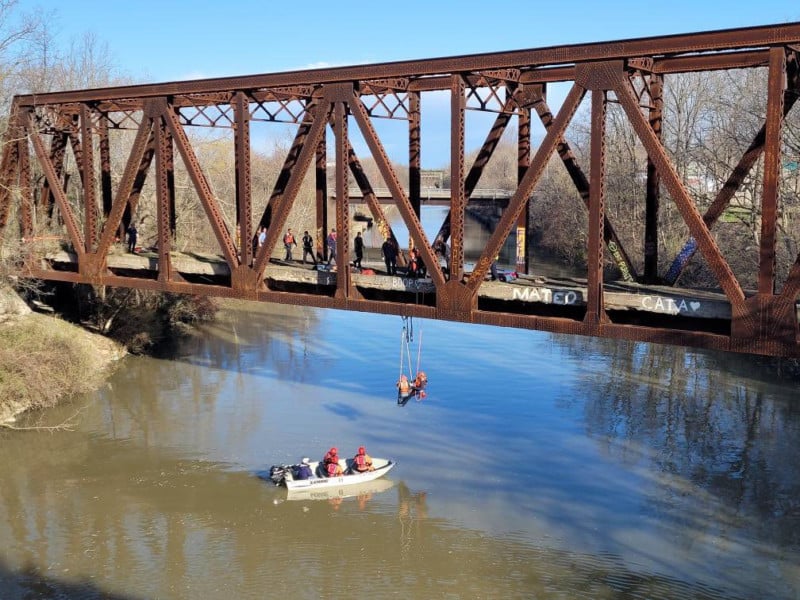 An unusual photo shoot involving an old railroad bridge and a circus performer shocked a passerby so much that they called 911 and sparked a massive rescue operation that caught the photographer and subject by surprise.


Rochester, New York, TV news station ABC13 reports that trapeze performer Julia Baccellieri was hanging from the railroad trestle bridge in the city’s Genesee Valley Park and posing for photos at around 7:40 a.m. last Friday when the shoot was spotted by a passerby. That person called 911 and reported that a person was dangling from the bridge.

The Rochester Fire Department then sprang into action.

“We just finished the photoshoot,” Baccellieri tells ABC13. “Avi [the photographer] and I gave thumbs up and I was like, ‘all right I’m gonna come up and come down.’ And then we had the rescue and the police all show up.

“We heard sirens and Avi was like ‘okay, I’m going to head to shore and I’m going to check out what’s going on over there.'”

A Talented and Experienced Trapeze Artist

Baccellieri is a traveling circus performer who was in Rochester for a series of shows. In her free time, she often partners with photographers and poses for outdoor action photos in which she hangs from her trapeze in a variety of locations… including from bridges.

Despite the fact that Baccellieri had performed the same stunt countless times and was capable of climbing back onto the bridge herself, the fire department determined that she needed to be rescued. What’s more, authorities called in additional resources, and there were soon over 24 rescuers on the scene, according to ABC13. Rope rescuers were sent to rappel down from the bridge above and water rescuers were sent with a boat below.

“Think she was a little confused that we were all there,” Rochester Firefighter Joseph Lee tells the news station. “And she said she does this all the time, but we were there to help her out.”

After a 40-minute rescue, Baccellieri was back on solid ground.

The Rochester Fire Department soon took to social media to report on the incident and celebrate the crew’s accomplishments. 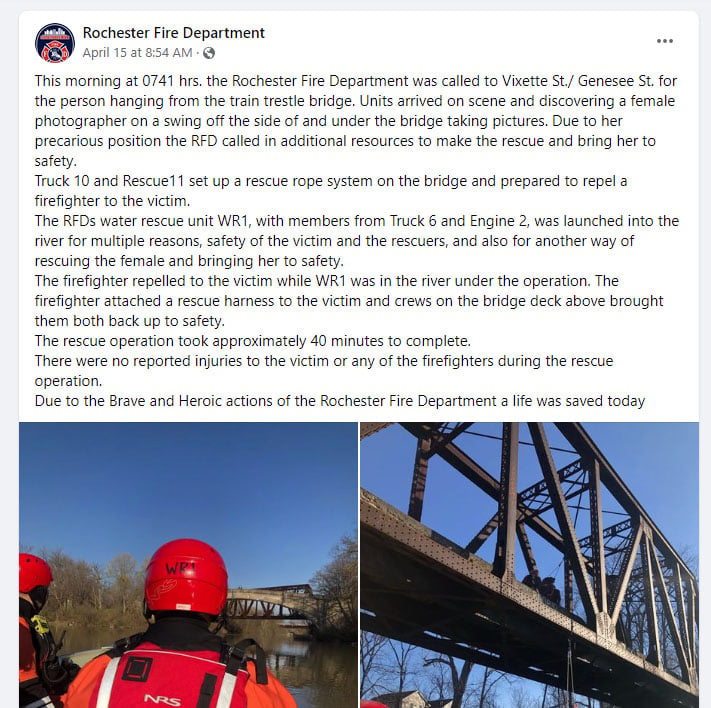 What’s curious is that the fire department reports that it saved a “female photographer on a swing” who was dangling from the bridge “taking pictures.”

“Units arrived on scene and [discovered] a female photographer on a swing off the side of and under the bridge taking pictures,” the department writes in a Facebook post. “Due to her precarious position the RFD called in additional resources to make the rescue and bring her to safety.

“Truck 10 and Rescue11 set up a rescue rope system on the bridge and prepared to repel a firefighter to the victim. The RFDs water rescue unit WR1, with members from Truck 6 and Engine 2, was launched into the river for multiple reasons, safety of the victim and the rescuers, and also for another way of rescuing the female and bringing her to safety.

“Due to the Brave and Heroic actions of the Rochester Fire Department a life was saved today,” the department adds.

Local news station News 8 WROC repeated the department’s claim that Baccellieri was a photographer and that the rescue was necessary.

The Rochester Fire Department has not responded to PetaPixel‘s request for comment.

This entire incident is a good example of why it can be a good idea to check in with local authorities before conducting any photo shoot that involves precarious setups or sensitive locations — it could save both a lot of time and a lot of taxpayer dollars.