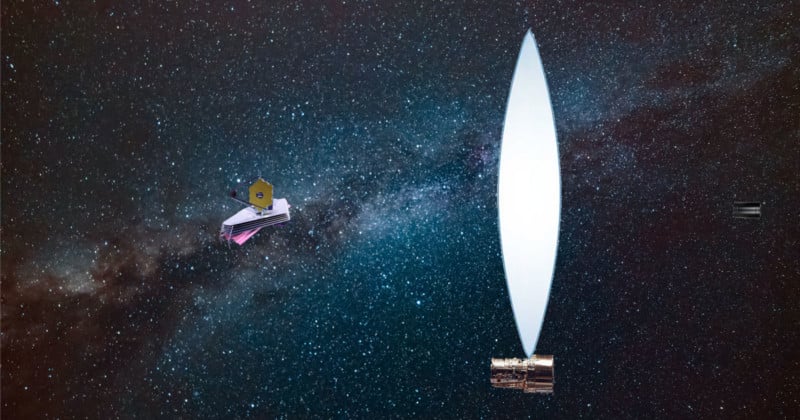 NASA’s huge new James Webb Space Telescope is the most powerful telescope ever launched into space, but the agency is already looking toward the future. It is currently exploring the possibility of creating liquid lenses to make a gigantic telescope perhaps 100 times the size of the Webb.


In a new article on its website, NASA writes that it is exploring new ways and fluid materials to build giant telescopes.

“When it comes to telescopes, bigger is better,” the agency writes. “Larger telescopes collect more light and allow astronomers to peer farther into space and see distant objects in greater detail.

“What if there was a way to make a telescope 10 times – or even 100 times – bigger than before? What started as a theoretical question is now a series of experiments to see if fluids can be used to create lenses in microgravity.”

The experiments are currently being stored on the ISS U.S. National Labin the United States Orbital Segment (USOS) of the International Space Station (ISS) as they await the arrival of the astronauts aboard Axiom Mission 1, a private crew mission that is scheduled to send four people to the ISS for an eight-day stay.

Private Israeli astronaut Eytan Stibbe, Mission Specialist 2 on the crew, will be carrying out the experiments as part of his research portfolio.

While liquids may be less useful as optical lenses in Earth’s gravity, they are great at focusing light in microgravity.

“All liquids have an elastic-like force that holds them together at their surface,” NASA says. “This force is called surface tension. It’s what allows some insects to glide across water without sinking and gives water droplets their shape. On Earth, when droplets of water are small enough (2 mm or smaller), surface tension overcomes gravity and they remain perfectly spherical. If a droplet grows much larger, it gets squished under its own weight.

“But in space, blobs of water and other liquids (after wobbling about) eventually assume a perfect spherical shape.”

Stibbe’s experiments will explore whether it will be possible for high-precision lenses and mirrors to be made in space using liquids.

“We thought, why not take advantage of the way liquids naturally behave in microgravity and apply it to the construction of large-scale telescopes or space-manufactured optical components that can have all kinds of uses,” says Edward Balaban, principal investigator of the Fluidic Telescope Experiment (FLUTE) at NASA’s Ames Research Center. “In microgravity, liquids take on shapes that are useful for making lenses and mirrors, so if we make them in space, they could be used to build telescopes that are dramatically bigger than was previously thought possible.”

Successful Prior Tests on Earth

Researchers previously tested the idea of liquid lenses on Earth by simulating a weightless environment with water.

“By injecting a liquid that can be solidified, into circular frames submerged in water, we were able to create lenses literally in a janitor’s bucket,” Dr. Valeri Frumkin of Technion – Israel Institute of Technology tells NASA. “Polymers, which are also used in nail salons to make acrylic nails or in adhesives like superglue, are a natural choice for lens material.

“The trick is to make sure that the water has the exact same density as the polymer we’re injecting so that the forces of buoyancy precisely oppose gravitational forces to simulate the conditions of weightlessness.”

The solid lenses created with liquid in this way were found to have “outstanding” surface quality that rivals or even beats what can be created with the best polishing methods that exist in optical lens manufacturing. What’s more, they only required a fraction of the time to create compared to traditional lenses.

“This method allows us to completely skip any mechanical processes such as grinding or polishing,” says Technion mechanical engineering professor Moran Bercovici. “The natural physics of fluids simply does all the work for us.”

After successful experiments on the ground, the researchers also tested their experiment in simulated microgravity on ZeroG parabolic airplane flights. They successfully but momentarily created liquid lenses of desired shapes before the airplane stopped diving and gravity ruined the lenses.

When the experiment is done in permanent microgravity aboard the International Space Station, Stibbe will be adding an additional step to cure the fluid into a lens that holds its shape. Once the lenses are created with liquid polymers and hardened with either UV light or temperature, they will be sent back to Earth for analysis by NASA researchers at Ames.

“If our station experiment is successful, it will be the first time an optical component is made in space,” says Balaban. “It feels a bit like making history.”

If all goes well, liquid transported on multiple missions to space could be combined to create colossal space telescopes that could otherwise be too large to launch from Earth.

The James Webb Space Telescope is set to capture the highest-quality images of space humans have ever seen, but it may one day be supplanted by “liquid lens” telescopes 100 times as large that capture space photos we can only dream of today.