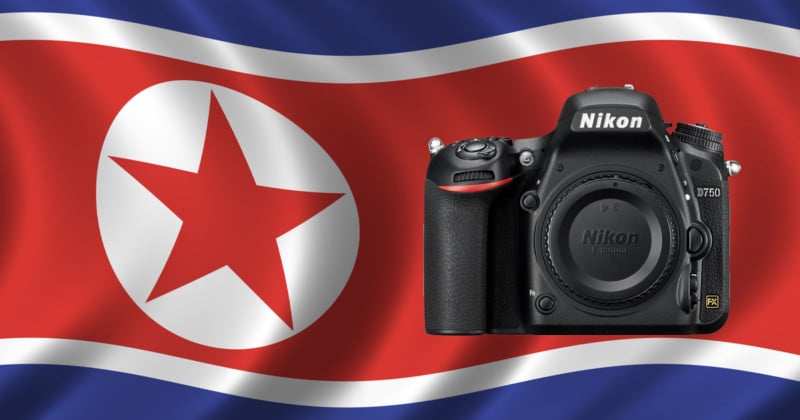 A new report that looked at the EXIF data from the North Korean state media photos has given some insight into what equipment photographers in the country are using. Nikon was the most favored last year, specifically the 2014 D750 DSLR.

NK Pro, a site that offers detailed analysis, research tools, and data for professionals working on North Korea, has published a report on the top cameras used by propagandists in the isloated country. NK Pro tracks leaders in the country, ships going in and out of North Korea, the missiles it launches and tests, the companies there, and offers access to a directory of specialists for those who need the most accurate and up-to-date information on a country and largely keeps tight control over what information goes out to the public both in and outside of it. Given the value of this information, NK Pro keeps the majority of its information and reports behind a paywall.

Extracting EXIF data from North Korean state media photos can give insight into what equipment photographers in the country use.

Nikon cameras were the most favored last year, with the employment of older models possibly suggesting limited resources.https://t.co/vDhq9skxBt

In a recent report, NK Pro extracted the EXIF data from North Korean state media photos to provide an insight into what equipment photographers in the country use, Nikon Rumors reports.

Nikon cameras were the most favored by North Korean photographers last year, specifically older models, which NK Pro says may indicate that there are limited resources within the country.

“North Korea’s favorite camera appears to be the 2014 Nikon D750, which was used to shoot 656 KCNA images last year according to EXIF data,” writes Ángel García, the author of the report. “The top five cameras used by KCNA are all Nikon DSLRs, responsible for 2,066 of the 2,504 shots from 2021.”

The Nikon D750 was a popular workhorse camera for portrait and wedding photographers for years prior to the advancements in mirrorless technology. The 24.3-megapixel full-frame sensor at the heart of the camera also featured the same autofocus and metering technology as the D4S and the D810 but in a camera body that was far more affordable.

"North Korea’s favorite camera appears to be the 2014 Nikon D750, which was used to shoot 656 KCNA images last year according to EXIF data," writes Ángel García.https://t.co/vDhq9skxBt

In 2022, the D750 is difficult to find new. While some retailers still have “imported” versions of the camera, Nikon USA lists it as out of stock. Adorama no longer lists the camera as available at all, which seems to have happened sometime in October of 2021. Based on the internet archive, it appears as though Adorama couldn’t reliably source the DSLR, so it was effectively discontinued from its perspective.

The camera is approaching a decade old and given its scarcity in the west, NK Pro’s insinuation that resources must be short in North Korea if its photographers are primarily using the aged DSLR does make some sense. Still, there is nothing wrong with the D750 and it clearly works just fine for the propagandists of the secluded nation.