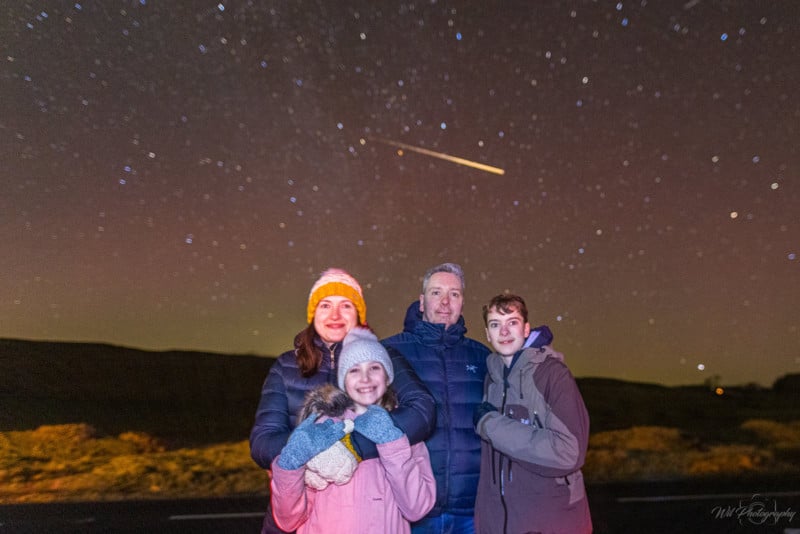 A British photographer has captured a once-in-a-lifetime picture after a shooting star whizzed across the sky at the exact moment he captured a family photo.


Photographer Wil Cheung was leading a group of stargazers on March 5th in Northumberland National Park in the UK, which offers visitors some of the darkest skies to be found in all of England.

“As well as being a photographer for 6 years, mostly astrophotography and landscapes, I run stargazing events in Northumberland, UK, within the Northumberland International Dark Sky Park,” Cheung tells PetaPixel, adding that he is also obsessed with seeing and photographing auroras.

That night, he took the group out from the country pub The Twice Brewed Inn at 8 pm to enjoy the northern lights (AKA aurora borealis) and the starry sky.

“I knew that the aurora was active and visible just at the front of the building, so after a short introduction and stargazing outside at the back, we then went to the north side and observed structure and the auroral glow,” the photographer says.

After some stargazing, Cheung began shooting some photos of the attendees at his event.

“I decided as a special treat to offer to photograph guests with the aurora behind them,” Cheung says. “There were eleven groups and towards the end, parents Steve and Louise and their kids Harry and Rose stepped up [for their family portrait]. I took the shot, which had to [have an exposure time of] 3.2 seconds, so I asked them not to move or breathe while the shot was being taken.”

As landscape and astro photographers well know, sometimes nature smiles upon your photo and gives you something completely unexpected.

“I pressed the shutter and that very moment a big shooting star appeared above them,” the photographer continues. “The other [twenty-five] guests gasped and I couldn’t believe it. I looked down and was so happy to have captured it.

“The funny thing is the family didn’t see the shooting star and actually did so well not to turn around to see what the fuss was.”

The family’s commitment to staying completely still during the entire exposure resulted in a picture-perfect portrait they will treasure for the rest of their lives.

“This shot is so unbelievably lucky,” Cheung says. “The aurora isn’t always active for us. We need clear skies when it happens, and to capture a random shooting star exactly above them — wow!”

The photographer says that the family loved the photo and instantly realized how rare of a shot it was, adding that they are getting it printed and framed as soon as possible.

Meteors (popularly known as shooting stars or falling stars) are actually quite common and can generally be seen on any clear night in dark locations away from light pollution. Catching one on camera in a perfectly-framed family photo, however, is a nearly impossible task.

Cheung was in the right place at exactly the right time for what he calls a “one in a million shot.”