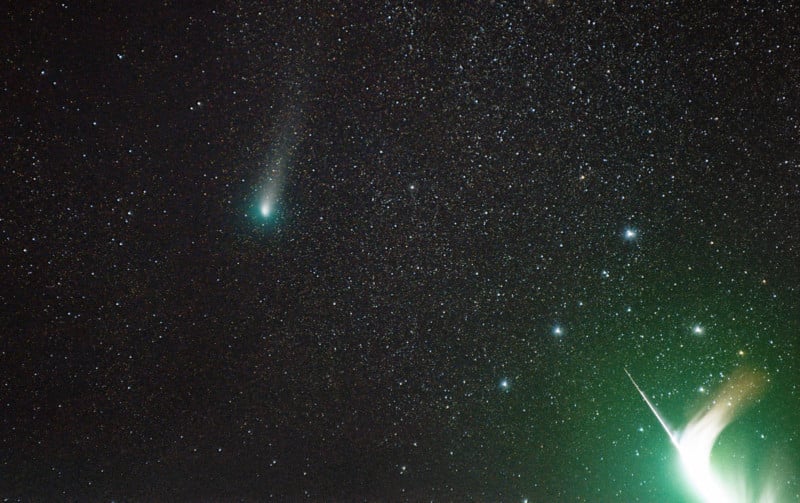 Montreal-based photographer François Guinaudeau went out a couple of nights ago to shoot Comet 21P/Giacobini-Zinner during the Perseid meteor shower. As he was capturing photos of the comet for stacking, a shooting star flew into the frame and exploded near the comet. Above is one of the photos that resulted.

“While video and VFX make my living, I am a passionate photographer and I recently decided to dive in a really special kind of photography: Deep Sky Object (DSO) photography,” Guinaudeau tells PetaPixel.

That night, Guinaudeau drove three hours with some friends to the Mont Mégantic Observatory, the first location on Earth to be designated as a dark sky preserve by the International Dark-Sky Association (IDA). He was shooting 15-second exposures with a Nikon D500 DSLR, a 400mm lens (equivalent to a 600mm on a full frame camera), and an equatorial mount that tracks celestial objects as they move across the night sky.

After shooting some wide-angle shots of the sky to catch meteors, Guinaudeau switched to the telephoto lens for photos of the comet.

“With such a small field of view, the chance of catching a meteor is really, really small,” Guinaudeau says. “But while my setup was taking the photos, a pretty big meteor hit the sky in our angle of incidence. We were able to see the persistence of it for around 30 seconds in the sky.”

“Then I realized that it was incredibly close to the part of the sky I was shooting, so I ran to check my photos. I did catch it in the corner of the frame — enough to make it a great and rare shot.”

Here’s the sequence of photos that was captured — we see the disintegration of the meteor:

“You can see so many things moving when you’re staring at the sky for hours,” Guinaudeau says. “When this kind of event occurs, you realize how alive the sky is.”

The Case Against the Photo Watermark