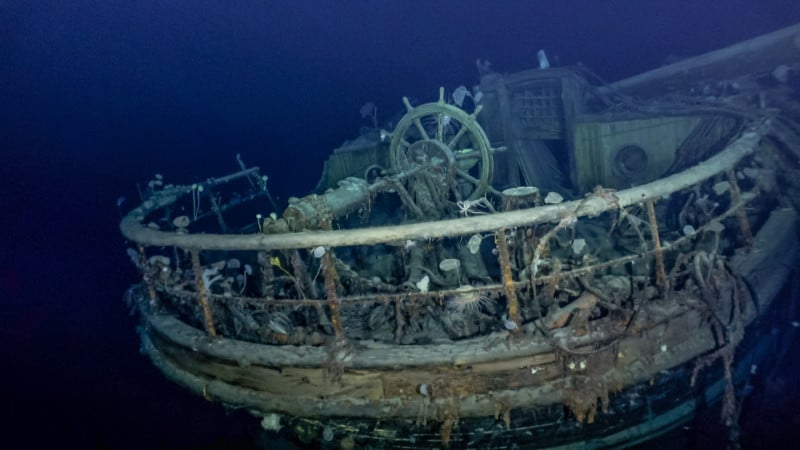 107 years after it sank off the coast of Antarctica, Sir Ernest Shackleton’s ship the HMS Endurance has been found in remarkably good condition, as new photos and 4K video shows.

The footage and images show the ship in striking detail and reveal that over a century after it sank, it remains in shockingly good condition.

The Final Voyage of the HMS Endurance

The Endurance was a large exploratory vessel that set out for the Antarctic from Plymouth in 1914 with a crew of 27 in the Imperial Trans-Antarctic Expedition that took place between 1914 and 1917.

Two days after leaving its last port of call, a whaling station in South Georgia — an island in the southern Atlantic ocean — The Endurance encountered a polar ice pack and its progress to its final destination, Vahsel Bay, was greatly slowed. It would spend the next month battling the weather and the ice, until it became stuck.

Over the course of the next several months, the ship would remain lodged in the ice but moved slowly with the ice pack as Shackleton and his crew attempted to break it free.

“Just as it appears she can stand no more, the huge floe weighing possibly a million tons or more yields to our little ship by cracking across… and so relieves the pressure,” Captain Frank Worseley said at the time. “The behavior of our ship in the ice has been magnificent. Undoubtedly she is the finest little wooden vessel ever built”.

It would not last forever, unfortunately. Finally, more than a year after the ship had left South Georgia en route to its mission, the wooden hull finally succumbed to the pressure of the ice and the Endurance sank in the Weddell Sea.

More than a century after it sank, the Endurance has been found nearly 1.9 miles (3,008 meters) below the surface through a discovery that was a collaboration between the Falklands Maritime Heritage Trust and History Hit, a content platform co-founded by historian Dan Snow. A documentary about the expedition to find the Endurance is set to premiere on National Geographic later this year.

Just as the Endurance showed it was an incredible wooden ship according to its captain as it battled against the elements for the better part of a year, its condition now over a century later shows that remains to be true.

“We are overwhelmed by our good fortune in having located and captured images of Endurance,” Mensun Bound, director of the exploration, says.

“This is by far the finest wooden shipwreck I have ever seen. It is upright, well proud of the seabed, intact, and in a brilliant state of preservation. You can even see ‘Endurance’ arced across the stern, directly below the taffrail. This is a milestone in polar history.”

The Endurance is designated as a protected historic site under the Antarctic Treaty of 1959 and will not be moved from its position. Instead, it will continue to be photographed, mapped, filmed, and studied where it lies.

Image credits: Header photo by by Falklands Maritime Heritage Trust and National Geographic. All other photos individually credited and provided courtesy of the Endurance22 expedition.