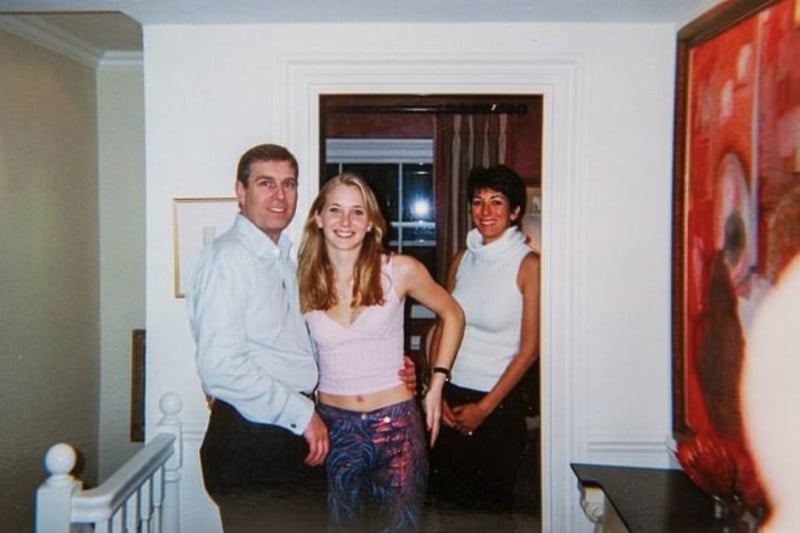 Is this photo worth $10 million? Prince Andrew thinks so, or at least reports indicate that his out-of-court settlement with Virginia Giuffre will cost somewhere north of $10 million. The figure makes this image perhaps the most costly single photo in the world.


In February, Prince Andrew, ninth in line to the British throne (behind Prince Charles and his heirs), settled a civil lawsuit in the United States with Giuffre out-of-court. She had alleged that she was sexually abused by Prince Andrew on three occasions after having been abused by associate Jeffrey Epstein and trafficked internationally.

In December 2021, Ghislaine Maxwell was found guilty of recruiting and grooming children for Epstein over a 20 year period.

This isn’t the first time that Giuffre has pursued her alleged abusers in court. In 2009, she filed a civil lawsuit against Epstein and reached a $500,000 settlement, also out-of-court. The settlement was considered important by Prince Andrew’s legal team as it stated that this would “forever discharge… any other person or entity who could have been included as a potential defendant… from all, and all manner of, action and actions of Virginia Roberts, including state or federal…”.

Giuffre also sued Maxwell for defamation in 2015, with was also settled out-of-court in 2017.

The Power of a Single Snapshot

What’s interesting about the lawsuit against Prince Andrew is the overwhelming power of that one image. It was taken on the evening of March 10th, 2001, at Maxwell’s home and unequivocally shows Prince Andrew with his arm around a 17-year-old Giuffre, with Maxwell off to one side.

Andrew and Maxwell have slightly forced smiles, while Giuffre’s is more relaxed. The camera was Giuffre’s and she says that the photographer was Epstein.

In one sense, this is an innocent photo of a group of people at a party; the only factual information you can glean is that they were together when it was taken. However, on a social level, it begs more questions than it answers.

Epstein was incredibly wealthy, which elevated him socially. Maxwell and Andrew were “hanging” off his coat tails–following the money–trading status for wealth. In the midst of this is a 17-year-old girl who claims she was sexually assaulted at age seven before moving in and out of foster care and experiencing stints of living on the street.

The then-41-year-old prince has his arm around the girl’s waist as she leans into him: were they asked to “move together” for the photo or is this a snapshot showing a relationship? There appears no innocent explanation.

A Photo That Forces Us to ‘Read’ It

The photo encourages us to dissect the immediate context and then infill the gaps in our knowledge about what it means: it is a photo that forces us to “read” it. This becomes increasingly profound as we learn more about it; when Giuffre says she was sexually abused by Prince Andrew, the photo opens up a whole realm of possibilities, creating imaginings that push us to interpret it.

If you think of your life as one long video stream in both the first and third person, then a still is one frame from that. The more context within the photo–sitting alongside narrative that describes what might have happened before and after–the more complex the interpretation becomes.

This photo, and this photo alone, invites us to imagine the worst, that the 48-year-old Epstein and his 41-year-old associate Maxwell trafficked her, allowing her to be sexually abused by not only him but also a string of his colleagues, including the 41-year-old Prince Andrew. Once the image became established in the visual media and re-used, that train of events became inextricably linked to it.

In his disastrous BBC interview, when Andrew was asked about the photo, he responded by saying “I have absolutely no memory of the photograph being taken.”

Prince Andrew then tries to cast doubt on whether or not it is his hand seen in the photo on Giuffre’s waist.

“Just to clarify sorry, you think that photo has been faked?” asked Maitlis.

“Nobody can prove whether or not that photograph has been doctored but I don’t recollect that photograph ever being taken,” Prince Andrew replied. “[…] I’m at a loss to explain this particular photograph. If the original was ever produced, then perhaps we might be able to solve it but I can’t.”

This line of argument can only lead in one direction and a number of Andrew’s friends have suggested it was a fake photo as well. Andrew’s ex-girlfriend Lady Victoria Hervey alleged on Instagram that the man holding Giuffre was actually an “Irish body double.”

Prince Andrew brings the veracity of the image into question early on in his interview with the BBC and, while distancing himself from the rumors, he allows the potential to run.

Just to re-iterate: the photo is center-stage in the case.

This makes it all the more surprising that no one has seen the original for over a decade. The photo was apparently taken on a Kodak film camera, possibly something like an Advantix F300, as it incorporates a built-in flash.

After being copied (reportedly re-photographed by a New Zealand photojournalist), the photo was subsequently published by the Mail on Sunday in 2011 alongside an interview — the British newspaper reportedly paid Giuffre $140,000 to run the photos. The picture was subsequently handed to the FBI, who scanned it before returning it.

Interestingly, no mention is made of the negative; one would assume that these were processed by a mini-lab and returned with the prints. It is possible that the negatives were thrown away–a not uncommon occurrence for “snapshots”–however, their existence would provide stronger evidence. The image is then said to have been packed when Giuffre emigrated to Australia between 2011 and 2016 and has not been seen since.

Giuffre says that the print “is not in her possession,” and even her legal team had not seen the original photo.

Last month, Prince Andrew’s lawyers asked for access to the original photo in order to begin the process of casting doubt on its authenticity, but Prince Andrew and Giuffre reached their settlement out-of-court before the legal battle could proceed any further.

It seems likely that we will never see the original itself, just the reproduction from the Mail on Sunday. However, this case is a stark example of how a single image can wield immense power. The court of public opinion–which eventually led to Andrew losing his military titles–found the implications of the photo compelling.

It is also a reminder as to the importance of visual media–it is overwhelmingly the single most important sense for humans and we process so much information visually that we place much greater weight on it. Our brains are hard-wired to postdict and predict what happens in the “instantaneous moment,” meaning that static photos become compelling. In short, we intuitively believe in the inalienable truth of a photo.

In this instance, the “value” of the photo is thought to be somewhere in the region of $10 million. That’s a huge sum of money and while that isn’t being paid for the photo itself, it’s the photo that formed the backbone to the case, swayed public opinion, and exacted a costly toll from the British royal family.